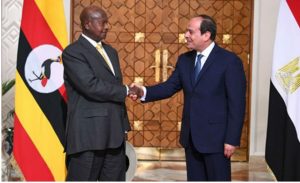 The leaders of South Sudan, Uganda, and Egypt are working days and nights to prevent Ethiopia from completing the construction of the $4 billion dollars Grand Ethiopian Renaissance Dam (GERD), a Ugandan ex-spy who uses a pseudonym name James Moises to protect his identity has claimed.

In a 3-page documented he delivered to a South Sudan News Agency’s (SSNA) reporter through an intermediary in Kampala, the former intelligence officer who previously worked for Uganda’ s External Security Organisation (ESO) exposes what seems to be an extensive campaign to put more pressure on Ethiopia through diplomatic and military means. The text also reveals how the three countries are coordinating their corporation to achieve their interests in the East African region.

“We have a situation where my country [Uganda] has become the number one ally of Egypt in the region. There is no problem of being an ally of a sovereign nation, but it is wrong when you do it to cause harm to other countries,” James wrote.

“The Egyptian President Abdel Fattah El-Sisi, Ugandan President Yoweri Museveni, South Sudanese President Salva Kiir are conspiring against Ethiopia to make sure Ethiopian mega project Grand Ethiopian Renaissance Dam does not go forward,” he explains, adding, “I have worked for many years as a spy and most of my assignments were in the East African region. I have never seen anything like it before.”

The former ex-spy accuses the three nations of being driven by self-fish interests.

“El-Sisi, Museveni, and Kiir have their own interests they want to achieve. The President of Egypt wants to continue controlling the water of the Nile River, Uganda wants to keep Salva Kiir in power with help from Egypt, and South Sudan’s leader future depends on Museveni, James explains.

In the document, James says he uncovers “serious techniques” designed to prevent Addis Ababa from completing its Dam. He asserts that “the plan includes Uganda and South Sudan to assist Egypt” if Cairo decides to go to war with Addis Ababa.

“El-Sisi always delivers weapons and ammunition to Juba in two different ways. He delivers them in the form of medicines or agricultural products, or he uses Uganda as an intermediary. These are all cover channels,” he says.

The construction of the Ethiopian Grand Ethiopian Renaissance Dam began in 2011. The project encountered several obstacles before including an attack by a rebel group. The Ethiopian authorities accused Egypt and Eritrea of being the sponsors of the rebel.

The 6.4GW project is set to become the biggest hydropower dam in Africa if completed.

James Moises is known for being the first foreigner to expose secrets between Uganda and South Sudan. His July 2013 article exposed Kiir and Museveni’s plan in weeks, months, and years leading up to the eruption of civil war in December 2013.