While responding to queries from the parliamentarians this morning, Prime Minister Abiy said that the best regional diplomatic approach Ethiopia has been pursuing helped it to get the support from its neighborhood at this critical time.

Specifically, he thanked Eritrea, Djibouti, Sudan, South Sudan, Kenya and Somalia for their support in the law enforcement operation.

The premier revealed that the TPLF junta had been playing a divisive role beyond Ethiopia; and the group was meddling in the affairs of some neighboring countries.

Since the junta conspired against the governments and interfered in their internal affairs of  states in the Horn of Africa, the countries were skeptical to establish real diplomatic ties with Ethiopia, he recalled.

However, the new foreign policy pursued by his government is pragmatic and fruitful as it has been resulting in cooperation with neighboring countries.

Abiy in particular appreciated the government and people of Eritrea for welcoming the members of Ethiopian Defense Force attacked by the TPLF junta.

“Ethiopian people must know this. The Eritrean people are not only brothers of Ethiopians; but  also friends in difficult times. When our soldiers in the Northern Command were attacked by the TPLF junta forces and collaborators in the command, they fled to Eritrea. From there they regrouped and fought the traitors,” he elaborated.

Members of the Northern Command who escaped from the junta were hungry and naked when they arrived in Eritrea, the PM added.

According to him, the treasonous act of the TPLF junta against the army might have jeopardized the country’s sovereignty had the long-standing rift with Eritrea not been resolved. “We also would not have received this support from them.”

It is to be recalled that Prime Minister Abiy Ahmed received the Nobel Peace Prize for 2019 for his efforts to achieve peace and international cooperation, and in particular for his decisive initiative to resolve the border conflict with neighboring Eritrea.

“Ethiopia is a founding member of the United Nations and African Union,” Abiy said, further stressing that his message to friends of Ethiopia is that “we may be poor but we are not a country that negotiate our sovereignty.” 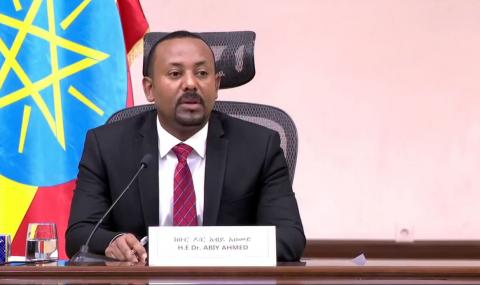