Here is another testimony from surrender Tigray troops

Aberhet, one of the TPLF junta fighters, has surrendered to the Ethiopian National Defense Forces (ENDF). She is 21 years old. Aberhet received military trainings at Bershelko camp to join the ENDF in 2018. Afterwards, she was deployed to Negele Borana to serve the ENDF. While she had been on duty there, she got a poor health. Then after, Aberhet’s military service was terminated for good from ENDF due to the serious illness.

She told the Ethiopian Press Agency Reporter that though she left the ENDF due to her chronic illness, she could not escape the forced conscription of the junta .

While Aberhet was helping her mother who is earning a living selling a locally brewed beverage called Tela, some members of the TPLF gangs were putting pressure on her mother day and night to convince Aberhet into joining the Junta because they knew that she had served the ENDF. Therefore, her mother was forced to accept their request. She also jointed the junta not to put her family’s lives at stake.

“As I was not able to find jobs and were receiving series of threats, I joined the junta. We have seven family members. My father has already passed away. My mother is our only breadwinner as she earns money selling Tela . That is why I was in the mess to help my mother.”

Aberhet said she did not fire a single bullet in her hand when she surrendered to the ENDF, Amhara Special forces and militia that are conducting rule of law enforcement operation in Tigray State . “I was given 150 bullets but I made no single shot because I am totally against this fighting. Children of the ordinary people are being killed at fronts now.”

The TPLF leadership preaches even the children and the youths that the people of Tigray are hated by all people and cannot live anywhere in piece. As the people are panicked by their preaching and also fear the TPLF, the people obey their instructions. This anti-peace group is drawing death and destruction to the people.

Abrehet said that the TPLF junta is making the people to sacrifice themselves for its evil end through the use of brainwashing, force and even buying off some others.

The people of Tigray never want to attack the ENDF as this force, in addition to defending the people’s security, has been building schools and health centers, Abrehet says, regretting that the junta tricked them into launching attack against the force that we regard as a family.

Here is another testimony from surrender Tigray troops 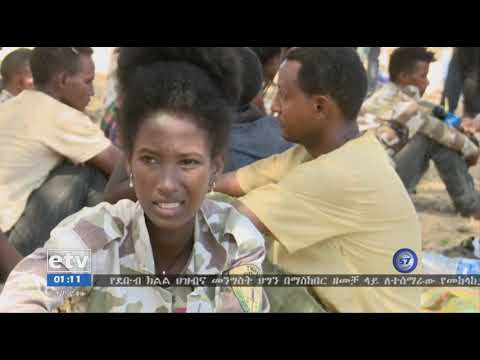 Aberhet, one of the TPLF junta fighters, has surrendered to the Ethiopian National Defense Forces (ENDF). She is 21 years old. Aberhet received milita...