victory
Belligerents
Egypt Ethiopia
Commanders and leaders
Egypt Isma'il Pasha
[1]
Denmark Adolf Arendrup †
Switzerland Werner Munzinger †
Count Zichy
Ethiopian Empire Yohannes IV
Ethiopian Empire Ras Alula
Ethiopian Empire Walda Mika'il Solomon
Strength
18,900 out of Egypt's standing army of 32,000. 4000 at Gundet, ~17,900 at Gura[2][3] 50,000 of which 15,000 - 20,000 could fight at any one time due to the terrain[4]
Casualties and losses
12,000 at Gura. 2000-3000 wounded. 2000 killed at Gundet.[5] Unknown. Estimated at least 10,000 killed. Thousands wounded. [6]
The Ethiopian–Egyptian War was a war between the Ethiopian Empire and the Khedivate of Egypt from 1874 to 1876, resulting in an unequivocal Ethiopian victory that accelerated the eventual downfall of Isma'il Pasha and dramatically reduced Egypt's prestige in the eyes of its European benefactors.[3]


Contents
1 Background
2 The Battle of Gundet
3 The Battle of Gura
4 European involvement
5 American involvement
6 Aftermath
7 See also
8 References
Background
Egypt under the rule of the Ottoman Empire, led by Isma'il Pasha, the Khedive of Egypt, sought to expand his reign to the land of Abyssinia and control the Blue Nile.[7][8] Isma'il Pasha became the ruler of Egypt in 1863. After annexing Darfur in 1875, he turned his attention to Ethiopia. He wished to create an empire covering the whole of the Nile River, part of which, the Blue Nile, is located within Ethiopia, and to do this he built a large army, recruiting many European and American officers. [9] Meanwhile, Emperor Yohannes IV became the emperor of Ethiopia in 1872 after defeating Tekle Giyorgis II in battle. He worked on modernizing his army, some of whom were trained by the British adventurer John Kirkham.

The Battle of Gundet
The Egyptians under Arakil Bey and Danish Colonel Ahrendrup invaded from their coastal possessions in Massawa, in what is now Eritrea. Following some skirmishes, the armies of Yohannes and Isma'il met at Gundet on the morning of 16 November 1875. Not only were the Egyptians vastly outnumbered, they were also taken completely by surprise as they were marching through a narrow mountain pass. The mass of Ethiopian warriors sallied forth from their hiding places up the slope and swiftly charged down upon the shocked Egyptian columns, nullifying the latter's advantage in firepower and causing many of the unenthusiastic fellahin soldiers to rout. This encounter ended in the complete annihilation of the Egyptian expeditionary force led by Colonel Arrendrup and in the death of its commander.[10]

Arrendrup's expedition was hopelessly inadequate for the tasks he set out to do. It amounted to scarcely more than some 4,000 troops and had no cavalry. Its leaders were, apart from the already mentioned Danish artilleryman and Major Dennison, an American, Major Durholtz, a Swiss, late of the Papal army, and Major Rushdi Bey, a Turk. Arakal Bey, the young nephew of Nubar Pasha (the Christian Armenian Premier of the Khedive) joined the expedition and was killed in battle.

About 2000 Egyptians perished with him and his two six gun batteries and six rocket-stands fell into the hands of the enemy.[11]

The Egyptians withdrew to Massawa on the coast and then to Keren, garrisoned since 1872 by some 1,200 Egyptians.[12] But Ismail Pascha could not leave the matter there, it was absolutely essential to regain the lost prestige. At all costs his European creditors had to be impressed, and he set out on mobilizing a larger force for a second expedition that would make amends for the devastating and humiliating loss he suffered in the hands of the Ethiopians at Gundet.[13]

The Battle of Gura
Main article: Battle of Gura
Following the botched invasion, the Egyptians again attempted a conquest of Ethiopia, this time with an army of about 13,000 men. The forces of Isma'il Pasha, now under Ratib Pasha, arrived at Massawa on December 14, 1875. [14]By March, they had arrived near the plain of Gura, and set up two forts, one in the Plains of Gura, and the other at the Khaya Khor mountain pass a few kilometres away. The Ethiopians, with a force of some 50,000 (of whom only about 15,000 could fight at one time due to battlefield layout) engaged them on the 7th of March, 1875, and Ratib ordered just over 5,000 out of 7,700 men stationed at Fort Gura to leave the fort and engage the Ethiopians. [15]This force was quickly surrounded by the Ethiopian advance guard, probably commanded by Ras Alula, and quickly broke. The Ethiopians then fell back, and, on the 10th of March, mounted a secondary attack on Fort Gura, which was repelled. The Ethiopian force dissolved the next day, and the devastated Egyptians soon withdrew.[16]


DYE(1880) p519 The Battle Field of Gura
European involvement
Several foreigners were involved in the war. These include a British adventurer John Kirkham on the Ethiopian side, and the Dane Adolph Arendrup [da] as well as a Swiss explorer Werner Munzinger on the Egyptian side. [17][18]Munzinger led one of the Egyptian attacks against Ethiopia, marching inland from Tadjoura, but his troops were overwhelmed by the army of Mahammad ibn Hanfadhe, Sultan of Aussa, and he was killed in battle.[1] [19]

American involvement
Several ex-Confederate officers as well as some Union officers participated in the conflict. The Egyptian Khedive was introduced to the idea of hiring American officers to reorganize his army when he met Thaddeus Mott, an ex-Union artillery officer, and adventurer in the sultan’s court in Constantinople in 1868. Mott regaled Ismail with testimonies about the advances the Americans had achieved in technology and tactics during the US Civil War that he convinced the Khedive to hire American veterans to oversee the modernisation of Egypt’s armed forces. In 1870, the first of these military overseers, ex-Confederate officers Henry Hopkins Sibley and William Wing Loring, arrived in Egypt. Loring was appointed by the Khedive as Inspector-General of the Egyptian army, and in 1875 was promoted to chief of staff to the commander-in-chief of the Egyptian military expedition in Ethiopia. A year later, Loring would play a decisive role at the Battle of Gura. [3]

Aftermath
Ethiopia and Egypt remained in a state of tension, which largely abated after the 1884 Hewett Treaty. [20][21] Ras Alula, however, had shown himself to be a reliable general, and was promoted by Yohannes IV to the rank of Ras, and appointed governor of the Mareb Malash.[22] 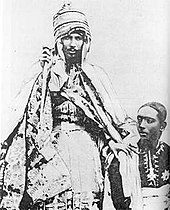 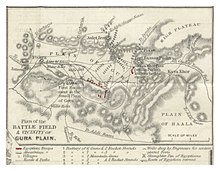 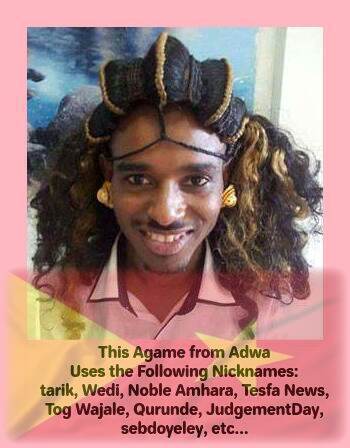