Eritrean soccer players who defected say they live in fear 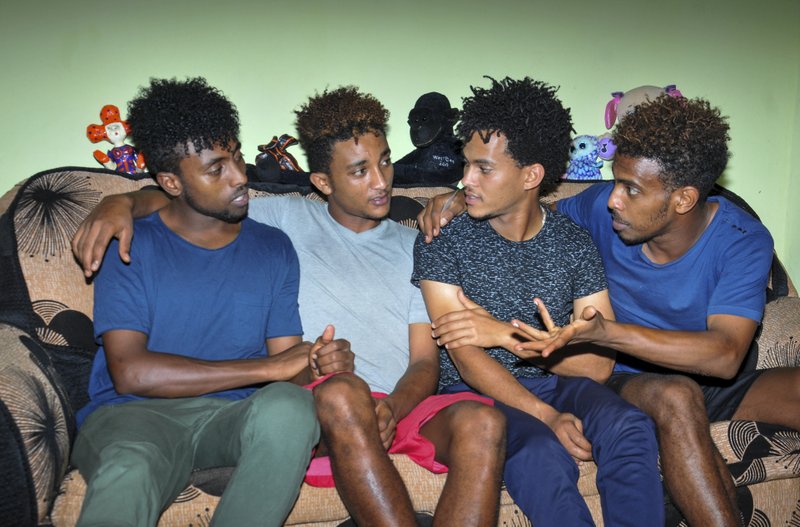 Eritrean soccer players who defected say they live in fear

After scoring two goals for Eritrea’s national under-20 soccer team during a tournament in Uganda late last month, Mewal defected with three teammates. But after applying for asylum they are in hiding in Uganda, fearful that authorities from home are looking for them.

“The only way for you to survive is by getting out (of Eritrea) and we all know this,” Mewal told The Associated Press in a telephone interview this week. “I had to take this opportunity because if I didn’t take this one who knows how long it would have taken me.”

Eritrea’s government under President Isaias Afwerki is one of the most tightly controlled regimes in the world, ranked with North Korea and Syria by Freedom House. Opposition parties in the East African nation are prohibited, and human rights monitors say an independent judiciary is nonexistent. Eritrea’s system of indefinite national service and forced military conscription are meant to control the population, according to Human Rights Watch.

The four young Eritreans described their life as part-time soccer players and part-time military conscripts, where they were required to build roads, guard buildings and follow the army’s whims. Though they had special status as soccer players they were still arrested for basic activities like walking in the street in a group.

“If you are more than two people hanging out there is always suspicion that you are organizing something,” said one player, Hermon Fessehaye Yohannes. Everyone is required to have “permission papers” from the government that allows them to travel in the streets, the players said.

Hermon recalled being stopped one night while walking from his work to his home, a distance of roughly 100 meters. His permission papers were at home and a policeman stopped him and refused to listen to his pleas.

“He started beating us up with a stick,” Hermon said, asserting that he was then briefly taken to jail. “This is our daily normal life, this is how we live.”

It was impossible to independently confirm the incident.

Eritrean athletes, especially soccer players, have been known to defect while traveling abroad. In 2012, 17 soccer players defected while in Uganda. Some players reportedly have been forced to pay a bond worth nearly $7,000 to ensure their return.

The newly defected players said their interest in soccer was sparked by the professional team Manchester United. While playing in the streets of the capital, Asmara, they heard that the team was the best in the world.

“They were our first inspiration,” Mewal said.

The players said their love of soccer transformed into a way to support their families and eventually escape the country.

“I knew since I was a child the only way to get out of Eritrea was to be a footballer,” said Simon Asmelash Mekonen.

The players said their escape plan began when they landed in Uganda. “The previous days whenever we tried there were a lot of people guarding over us, watching us, it was just impossible,” Mewal said.

But after defeating Zanzibar and scoring five goals, the team was in a celebratory mood. The players asked permission to go for a walk, then called the only person they knew in Uganda and defected.

But now they fear that Eritrean authorities are searching for them as they wait for word on their asylum claims with the Ugandan government.

“We don’t know what will happen to us next,” Hanibal Girmay Tekle said. “We cannot go outside.”

The lawyer representing them, Kimberley Motley, said in a letter to the United Nations requesting support that “my clients believe that they will be repatriated back to Eritrea by the authorities and therefore respectfully request to be resettled to another country.” The letter describes how the players were forced into military service at the age of 17.

A spokeswoman for the U.N. refugee agency in Uganda, Duniya Aslam Khan, said Uganda’s government is responsible for granting asylum and that she could not share information regarding the players’ claims.

A spokesman for the office of Uganda’s prime minister, Julius Mucunguzi, said he wasn’t aware of the asylum claim but said the Eritreans might not have included the detail that they are soccer players.

“Our doors are open to anyone from anywhere who is seeking safety and security and is fleeing from danger,” he said. “The doors of Uganda are open to get the safety they need.”

Re: Eritrean soccer players who defected say they live in fear

...Eritrea’s government under President Isaias Afwerki is one of the most tightly controlled regimes in the world, ranked with North Korea and Syria by Freedom House. Opposition parties in the East African nation are prohibited, and human rights monitors say an independent judiciary is nonexistent. Eritrea’s system of indefinite national service and forced military conscription are meant to control the population, according to Human Rights Watch.