No need to complain unless you are jealous of why starving people are getting aid!
Top

Axumezana wrote: ↑
13 May 2022, 08:50
No need to complain unless you are jealous of why starving people are getting aid!

The disclosure from the UN's World Food Programme (WFP) comes amid rising fears of starvation deaths in Tigray, where the UN has previously estimated that 400,000 people faced famine-like conditions.

Since July 12, 445 contracted non-WFP trucks have entered Tigray, but only 38 have returned, WFP spokeswoman Gemma Snowdon said in a statement.

"At the moment this is the primary impediment to moving humanitarian aid into Tigray. We are unable to assemble convoys of significant size due to lack of trucks," Snowdon said.

"We are continuing to work with transporters and local authorities in Tigray for trucks to be released."

WFP has no information about where the trucks are or what they are being used for, Snowdon said.

Tigray has been mired in conflict since November when Prime Minister Abiy Ahmed sent troops to topple the regional ruling party, the Tigray People's Liberation Front, a move he said came in response to TPLF attacks on army camps.

The 2019 Nobel Peace Prize winner promised a swift victory, but the TPLF retook much of Tigray including its capital Mekele in June and Abiy then declared a humanitarian ceasefire.

Concerning. None of the 149 trucks in the convoy that reached #Mekelle #Ethiopia last week returned. Only 38 out of 466 trucks that entered #Tigray since 12 July returned. We need trucks to deliver lifesaving assistance to people in #Tigray. @OCHA_Ethiopia @WFP_Ethiopia pic.twitter.com/7SIPZpvItO

But the UN says Tigray remains under a "de facto blockade" and has warned of a "looming catastrophe" as fighting has dragged on and spread to neighbouring regions.

The Ethiopian authorities and Tigrayan rebels have blamed each other for obstructing humanitarian convoys trying to reach Tigray.

A government Twitter account on Thursday referred to "suspicions that TPLF (is) seizing trucks for own logistics".

But TPLF spokesman Getachew Reda cited obstacles drivers faced while entering Tigray from neighbouring Afar region, adding they have "nothing to do" with Tigrayan officials.

"Drivers of trucks that UN has commissioned complain about fuel availability, (security) concerns, harassment at checkpoints, being stranded at Afar for months, etc," he said on Twitter.

A humanitarian official in Tigray, speaking on condition of anonymity, said many truck drivers were Tigrayan and had faced ethnically-motivated harassment at checkpoints while heading into the region. 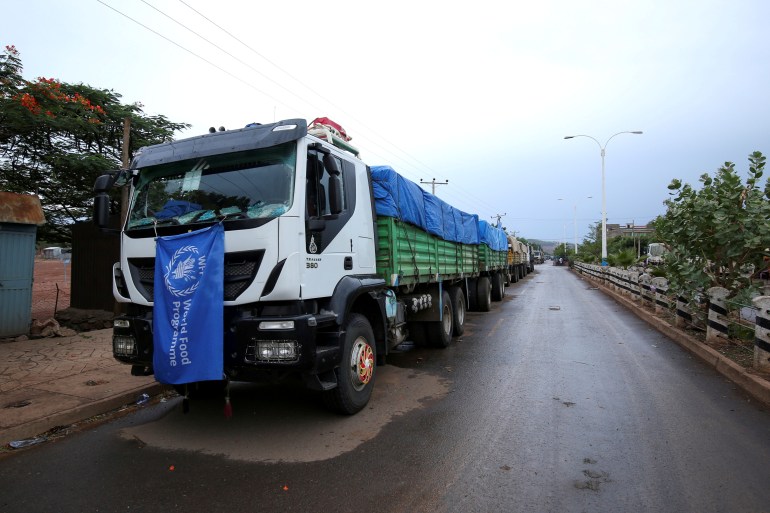