We write to you on behalf of the doctors, nurses and other health professionals working on the frontlines of the war in Northern Ethiopia. As part of the global medical community, we want to address your actions during the course of the current conflict in Ethiopia and share our sincere concern that you have used your leadership role of a UN agency, mandated to protect global health, to further tensions in Ethiopia and purposefully ignore millions in need.

Many of us have worked in Afar and Amhara during the conflict. We have seen first-hand the human cost of the fighting: malnutrition, acute injuries, mutilation, rape and death. Seeing such horrors has become part of our day to day lives.

We have had to work in the most extraordinarily difficult circumstances with severely limited resources. But, throughout we upheld our duty and have done everything we can to save lives.

Here are some statistics from the latest United Nations Office for the Coordination of Humanitarian Affairs bulletin published on 7th April 2022 to articulate the desperate situation facing these regions:

• In Amhara, more than 500 health facilities, and 1,706 health posts have been damaged and/or looted due to the conflict and need rehabilitation and support.

• In Afar, only 94 health facilities, or 22 per cent of the 414 facilities, are functional, including two hospitals and 31 health centres.

The current situation is a direct result of the Tigray People’s Liberation Front (TPLF) and allied forces’ attacks on the people of Afar and Amhara. During the TPLF’s invasion of Afar and Amhara in June 2021, they undertook a systematic campaign to cripple the region’s health infrastructure as well as injure, rape, and kill civilians. These crimes have been documented by international organisations such as Amnesty International and the UN. We have painfully witnessed it ourselves.

Efforts to bring aid to the regions and Tigray have been severely hindered in recent months by further TPLF attacks. The UK’s Permanent Secretary to the UN in Geneva Simon Manley confirmed this on the 8th March, stating:

During the conflict, we have looked to the World Health Organisation (WHO) for support. Sadly, we have been forgotten. Under your leadership WHO has ignored the plight of Afar and Amhara. As a Tigrayan, and as a former Health Minister in the TPLF-led Government, we understand your sympathies toward Tigray. Indeed, we too want to see more aid reach our brothers and sisters there. However, raising the alarm for Tigray should not come at the cost of shutting down the needs of Afar and Amhara.

You have taken a political and overtly biased approach to the conflict. Your actions and rhetoric have helped create a warped international view of what has occurred in Ethiopia. This has been clear throughout the past 18-months. Every press conference, every statement and every tweet has been designed to raise the alarm for Tigray, quieten the TPLF’s destruction of Afar and Amhara and heighten opposition toward the government of Ethiopia. A simple google search of your comments on the conflict highlights it for all to see.

We were concerned by your trip to Washington D.C. last month to meet with dozens of US Government officials and representatives. It is no coincidence your meetings came at the same time as two bills that seek wide-ranging sanctions against Ethiopia and its people are progressing through Congress.

Moreover, there is wide frustration among the Ethiopian medical community that you have consistently refused to engage with the country’s Health Ministry and have ignored the Ethiopian Government’s request for an investigation into your actions as the head of the WHO.

We ask you now, as an Ethiopian, to stop using your considerable influence to further the aims of the TPLF and stop silencing the urgent needs of Afar and Amhara. As the current humanitarian truce holds, instead use your position to improve the health of all Ethiopian people, rather than engage in the politics that has brought so much destruction.

We will continue working 24/7 to rebuild the health facilities in Afar and Amhara and treat the thousands that need medical attention every day. As clinicians, we look beyond the ethnic tensions that have plagued Ethiopia for three decades and treat everyone in need as equals. It is our sincere hope you take that approach going forward.

This letter reflects how politics has penetrated deep into professionals! Dr. Tedros has been doing a commendable job globally and trying to politicize his duties and activities as Head of WHO is simply irrelevant. I would like to see these so called professional organizations to request the Abiy government to immediately lift the siege on the Tigray people to save them from dying due to hunger and lack of medication.
Top

Tedros Adhanom has never been professional in his working life. He has been and still is the right hand man of the Terrorist TPLF organization which was involved in ethnic cleansing of the Amhara People, Somali People, the Gambella People, the Oromo People,...

It is an open book about his evil involvement in the sterilization of the Amhara Women without their consent when he was Health Minister during the TPLF leadership in Ethiopia.

He is now using the WHO platform to help the Terrorist TPLF organization that looted Ethiopia for 27 years and that caused untold amount of destruction in the Amhara, and Afar Region during its adventurous war the last 2 years.

He is not fit for the position professionally or morally. He is a Criminal !

For the damages he caused in the lives and properties of the Ethiopian People he should be in prison where he is supposed to be like any other terrorist.

The letter that was distributed is actually very mild. It did not tell how criminal and evil Tedros Adhanom is.

Axumezana wrote: ↑
13 May 2022, 08:07
This letter reflects how politics has penetrated deep into professionals! Dr. Tedros has been doing a commendable job globally and trying to politicize his duties and activities as Head of WHO is simply irrelevant. I would like to see these so called professional organizations to request the Abiy government to immediately lift the siege on the Tigray people to save them from dying due to hunger and lack of medication. 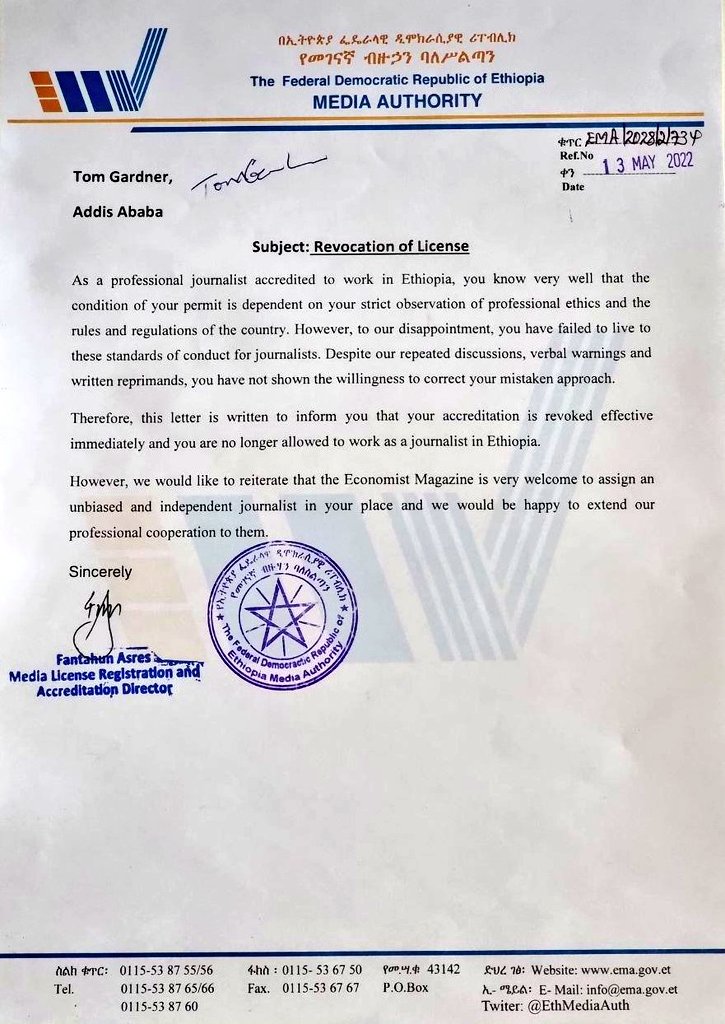 Tom Gardner (@TomGardner18), a correspondent for The Economist, is revoked of his work permit as a journalist in Ethiopia by
@EthMediaAuth (EMA). The Authority announced, that the journalist failed to live the standards of professional ethics and rules & regulations of the country. He baselessly and unethically accused & defamed Ann Fitz-Gerald (@afitz3105), for her research work on IDPs that fled from Tigray, forwarding to the Deputy Managing Director of Macdonald-Laurier Institute (@MLInstitute), Mr. Mike Therien(@miketherien) 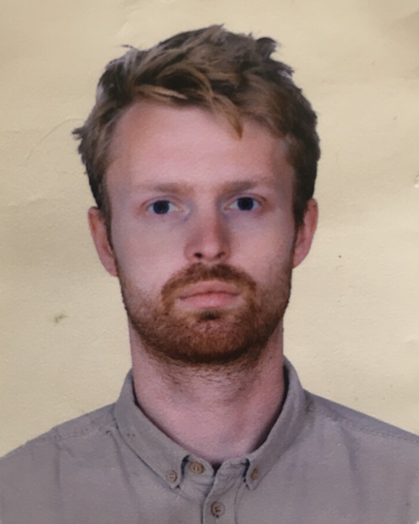 EMA said despite their repeated discussions, verbal warnings, and written reprimands the journalist doesn't show the willingness to correct his mistaken approach. The Authority also asked The Economist, to assign an unbiased and independent journalist in his place.