If Russia Cuts Off its Gas, Europe Could Go Dark! 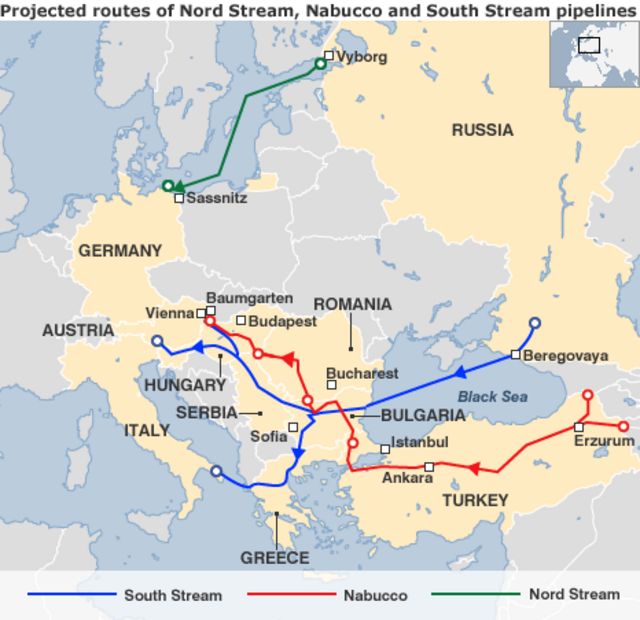 The European Union has a lot more to lose than the U.S. from conflict with Russia, one reason why the western allies are having difficulty agreeing on a tough stance in the standoff over Ukraine.

Russia ranks as the EU’s fifth-biggest trade partner -- as well as its top energy supplier -- while for the U.S. it barely makes the top 30. There’s a similar gap for investment, with Russia drawing in money from Europe’s household names including Ikea, Royal Dutch Shell Plc and Volkswagen AG.

With inflation surging and consumers squeezed by a surge in energy prices, EU officials are moving carefully on the prospect of sanctions. They want Russia to feel more pain than Europe from measures aimed at preventing an invasion of Ukraine. They’re worried a war could choke off natural gas supplies in the middle of winter when they’re needed most.

All those issues may feature in a call between U.S. President Joe Biden and his European counterparts scheduled for Monday in a bid to strike a unified position.

Adding to Europe’s reluctance is a sense that for penalties imposed on Russia in the past, especially after the 2014 invasion of Crimea, it was the EU economies and not the U.S. that paid the price. As U.S. President Joe Biden warns that Russia’s military may move shortly, EU leaders such as France’s Emmanuel Macron are playing for time. Russia maintains it has no plans to invade Ukraine.

“Sanctions have the best effect if they are efficient,” German Foreign Affairs Minister Annalena Baerbock said last week. “It’s about sanction which really have an effect, not against oneself, but rather against Russia.”

By contrast, Russia is “well prepared” to weather any sanctions after taking steps to insulate itself from measures the U.S. might impose, said Viktor Szabo, fund manager at Aberdeen Asset Management in London.

“It will be difficult to inflict such a pain that would be felt,” Szabo said. “It wouldn’t push Russia to the edge.”

“Europe stands alone when it comes to how much more consumers will have to pay for natural gas. Our in-house model of the eurozone economy points to a hit from higher energy prices of as much as 1% of GDP, with the impact lasting well into this year.”

Energy is the biggest friction point. The U.S. is a net energy exporter, but the EU relies on imports, and Russia is its No. 1 supplier of both oil and natural gas.

JPMorgan Chase & Co. economists on Friday warned a surge in the price of oil to $150 a barrel would hammer growth and spur inflation.

Gas is a particularly sensitive matter now, with Russia holding back supplies for the past few months. Prices have tripled, boosting the cost of electricity across the continent. It’s the main reason Europe is suffering a bigger energy shock than the U.S.

Escalation with Russia over Ukraine could make it worse. EU officials are caught in a bind, since domestic gas production is in decline while Russia has built facilities to supply more.

Russia’s gas exporter Gazprom PJSC and partners including Shell have spent 9.5 billion euros ($10.8 billion) completing the Nord Stream 2 pipeline and want to open it. Military action in Ukraine would put that on the chopping board -- and any future deals to boost Russian supply to the region. That would exacerbate the energy shortage in the EU.

“Were sanctions to be placed on Russia’s energy exports or were Russia to use gas exports as a tool for leverage, European natural gas prices would probably soar,” said Capital Economics analyst William Jackson. “We think they would far exceed the peak reached last year.”

Sanctions against Russia would also benefit U.S. exporters who are seeking to ship more liquefied natural gas into Europe.

Sanctions on non-military technologies, or blocking access to foreign financing for companies

Halting access to the Swift payment system, which would make it much more difficult for Russia to collect payments on $535 billion of exports a year

Europe’s businesses have more at stake because they’ve invested more in Russia than their U.S. counterparts -- and the gap has widened in recent years. Russia is also one of the biggest exporters of aluminum, nickel, steel and fertilizers.

Ikea, Volkswagen and the brewer Carlsberg A/S operate in Russia. Italy’s UniCredit SpA has been eyeing an acquisition there that would make it the biggest foreign bank in the country -- overtaking Societe Generale and Austria’s Raiffeisen.

Europe also has been stung hard by past sanctions aimed at Russia. After Russia annexed Crimea in 2014, the U.S. and EU agreed on a sanctions regime.

Three years later, a study by the Kiel Institute for the World Economy found that while Russia suffered the biggest trade losses, Germany wasn’t all that far behind. Other EU economies got hit too. The U.S. actually came out ahead. A similar pattern followed sanctions on Iran.

Politicians in the U.S. and Europe boast about the economic pain they’re capable of inflicting on Russia. They’ve kept quiet about the “inconvenient truth” that there’ll be consequences at home too, according to Tom Keatinge, head of the Centre for Financial Crime and Security Studies at the Royal United Services Institute in London.

“Sanctions issued by Western countries rarely include the need to accept any meaningful self-harm,” Keatinge wrote last month. “The impact on the economies of the issuers -- particularly in the EU -- may be significant.”