The extensive use of military unmanned aerial vehicles (‘armed drones’), for lethal strikes by the Ethiopian government in the Tigray region is fast becoming one of the most devastating but neglected human rights violations in the world. The limited international attention paid to the use of drones in the Tigray war has, up to now, focused on how the use of drones has affected the course of the war in favor of the Ethiopian government. There is a common assumption that drone strikes are carefully targeted on military targets and minimize civilian casualties. Although the information blackout prevents a systematic assessment of the evidence, accumulating reports show that the impacts on civilians are devastating. Daily attacks on urban areas with large populations, including loss of civilian lives and destruction of civilian infrastructure have failed to incite the concern and outrage it merits.

Between October 18, 2021 and January 4, 2022, at least 143 people had been killed and 213 wounded from airstrikes, mostly by drones. On January 9, at least 56 people were killed in a drone attack on a camp for internally displaced people in North West Tigray. As a result, the UN Office for the Coordination of Humanitarian Affairs (OCHA) announced that “humanitarian partners suspended activities in the area due to the ongoing threats of drone strikes”. On January 11, 17 civilians, mostly women, were killed and dozens injured after a flour mill was struck in Mai Tsebri. It is to be recalled that on October 22, an air strike near the airport coincided with the landing time of a UN humanitarian flight. As a consequence, the UN cancelled further humanitarian flights to Mekelle. Drones are promoted as precision weapons but time and time again the outcomes of attacks shows that either drones are deliberately used to target civilians or these weapons lack precision.

Open source investigations have revealed that the Ethiopian government has imported drones from China, Iran, Israel, Turkey, and the United Arab Emirates (UAE) to aid its efforts in the brutal civil war it has been prosecuting in Tigray for more than 14 months. This has been supplemented with extensive military aid provided by the UAE, as well as by Turkey, Iran and China. Ethiopian Airlines, the flag carrier of Ethiopia has also been implicated in providing the military an airbridge. Moreover, additional infrastructure has been built to support the expanded drone operations. The presence of armed drones flying over towns and cities have not only been confirmed by testimonies from Tigray but also by independent open source investigation at least once, while additional images that have been circulating on social media provide visual confirmation.

The attacks have since progressed to aggressive aerial bombardment of cities, towns, a camp for internally displaced people in Dedebit where at least 56 people were killed, a refugee camp near Mai Tsebri where three Eritrean refugees were killed, a market in Alamata where 28 people were killed and more than 80 people were injured, an attack on a public transport bus in Milazat where 30 people were killed, and an attack on a flour mill in Mai Tsebri, where 17 were killed and many injured. During this same period, Mekelle has reportedly been attacked at least 13 times with reports of multiple civilian deaths and destruction of property. Critical civilian structures have also been targeted, including a power substation in Mekelle and the region’s main hydroelectric dam resulting in power blackout. 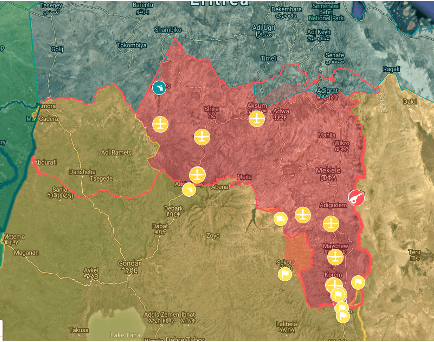 This is not a comprehensive list of Ethiopia’s drone strikes in Tigray since the beginning of the conflict on November 3, 2020, but a highlight of the serial attacks outside combat zones over the last three months only, based on reports from the regional media and humanitarian sources.

The world’s inattention to this crisis has to a degree been facilitated by the draconian media and communication blackout imposed by the Ethiopian government for the better part of the last 14 months. Despite these efforts to cut off Tigray from the world, with the obvious intention to keep grave human rights and humanitarian violations out of sight of the international community, visual documentation in the immediate aftermath of bombings by armed drones persistently reveal the extent to which these attacks devastate civilians, including children, women and the elderly. These grim videos from Tigray reveal hellish scenes of bodies strewn on blood-stained ground, burnt public transport vehicles, destroyed homes and severely damaged public and private infrastructure. Eyewitness testimonies from humanitarian workers and other observers also confirm the drone attacks have targeted civilian objects and have resulted in civilian deaths.

These images and testimonies, however, belie the claims made by the Ethiopian government, which proudly claims that these technologies, and operations are to “neutralise identified terrorist cells and terrorist hideouts.” This justification is nonetheless the only one that has been forthcoming to support the expanded use of drones since October 2021 against civilian settlements and hundreds of kilometers outside of any combat areas. Regardless of the rationale, proffered, there is no doubt that this falls far short of the requirements of international humanitarian law standards, including the rules of distinction, proportionality, and military necessity, while protecting fundamental right to life and principle of human dignity.

The humanitarian, legal and ethical concerns related to armed drones are not new: there is a widespread understanding among states, researchers, humanitarian organisations and civil society on their impact, especially when used against urban targets. This was echoed in the discussions of the recent (December 2021) sixth review conference of theUnited Nationsconventionon certain conventional weapons, although the conference ended without meaningful consensus.

Until such a time the laws of armed drones are clarified and there is a body to monitor and report on violations to the laws, the international community must take steps to make the sky safe for Tigrayans again.

Governments have the primary responsibility to protect the lives of civilians, especially during armed conflict. Contrary to expectations, Abiy Ahmed’s government is implementing a campaign of drone attacks in areas outside active combat zones. These same areas are also under government-imposed humanitarian blockade. Already, Ethiopian forces and allied militia stand accused of a range of human rights abuses, including forced displacement and detention on ethnic grounds,mass extrajudicial killings, weaponized sexual and gender-based violence and the use of starvation as a weapon of war. These violations have led the European Union and U.S. government to pause some budget support, and most recently, Ethiopia has lost its Africa Growth and Opportunity Act (AGOA) beneficiary status, a lucrative program which enhances market access to the U.S. for qualifying sub-Saharan African countries.

This has not stopped violations of international human rights and humanitarian law targeting civilians and civilian infrastructures, which makes life insecure and unbearable for millions of Tigrayans already suffering man-made famine. It is also critical to highlight that these aerial attacks are being conducted as the region is gripped by lack of medical supplies, including surgical gloves, insulin and other essentials. Even as health professionals from Tigray and around the world put out pleas for medical aid to be allowed to salvage the Tigrayan health care system, three civilians critically injured in the Dedebit drone strike died in the hospital as a result of lack of medical resources to provide them with the treatment they needed.

Tigrayans should not be looking at the sky with terror.

Communications blackout, indifference of the international community and an elastic interpretation of sovereignty have given Abiy Ahmed’s government an unrivalled opportunity to conduct aerial attacks against civilians and civilian objects with impunity. Tigrayans should not be looking at the sky with terror. The onus of ending the tragedy in Tigray falls squarely on the international community. Incommensurate, half-hearted and inadequate multilateral response has already emboldened gross violations of universal human rights and international humanitarian laws to continue with impunity. Concerns of further devastation are growing each day as open source investigation continues to reveal newly obtained drones.

The most frequently utilized drones terrorizing Tigrayans are the Turkish Bayraktar weapons system. These drones use parts manufactured by seven different U.S. companies as well as Austrian, British, Canadian, French and German suppliers. If those companies were to cease supplying Turkey’s factories, the drones could not fly, or could not kill.

It is, therefore, essential for the United Nations, the African Union and Ethiopia’s development partners to take prompt and decisive action to stop immediately the shipping to and use of armed drones in Ethiopia; to condemn strikes that target civilians, especially in towns and cities; to support efforts to make public the use and impact of drones by the Ethiopian government and its allies; and to strengthen efforts of the recently established U.N. international commission of human rights experts on Ethiopia to investigate all reports of civilian casualties from drone strikes, incendiary devices and other forms of aerial bombardments, with a view to hold human rights violators accountable, including those from foreign countries that are supplying drones, components for drones, manpower or intelligence. Victims of violations must receive justice, reparation including restitution, and – most important of all — guarantees of non-repetition.

In the end, a roadmap that sets out a path towards sustainable peace is necessary. All stakeholders that are trusted by both parties to lead peace efforts must do so with determination, courage, transparency, integrity, and urgency. Essential to peace is accountability. Today, foreign countries supplying or operating drones in Ethiopia, or providing the components for those drones, must cease feeding the war machine and instead allow peace to prevail. 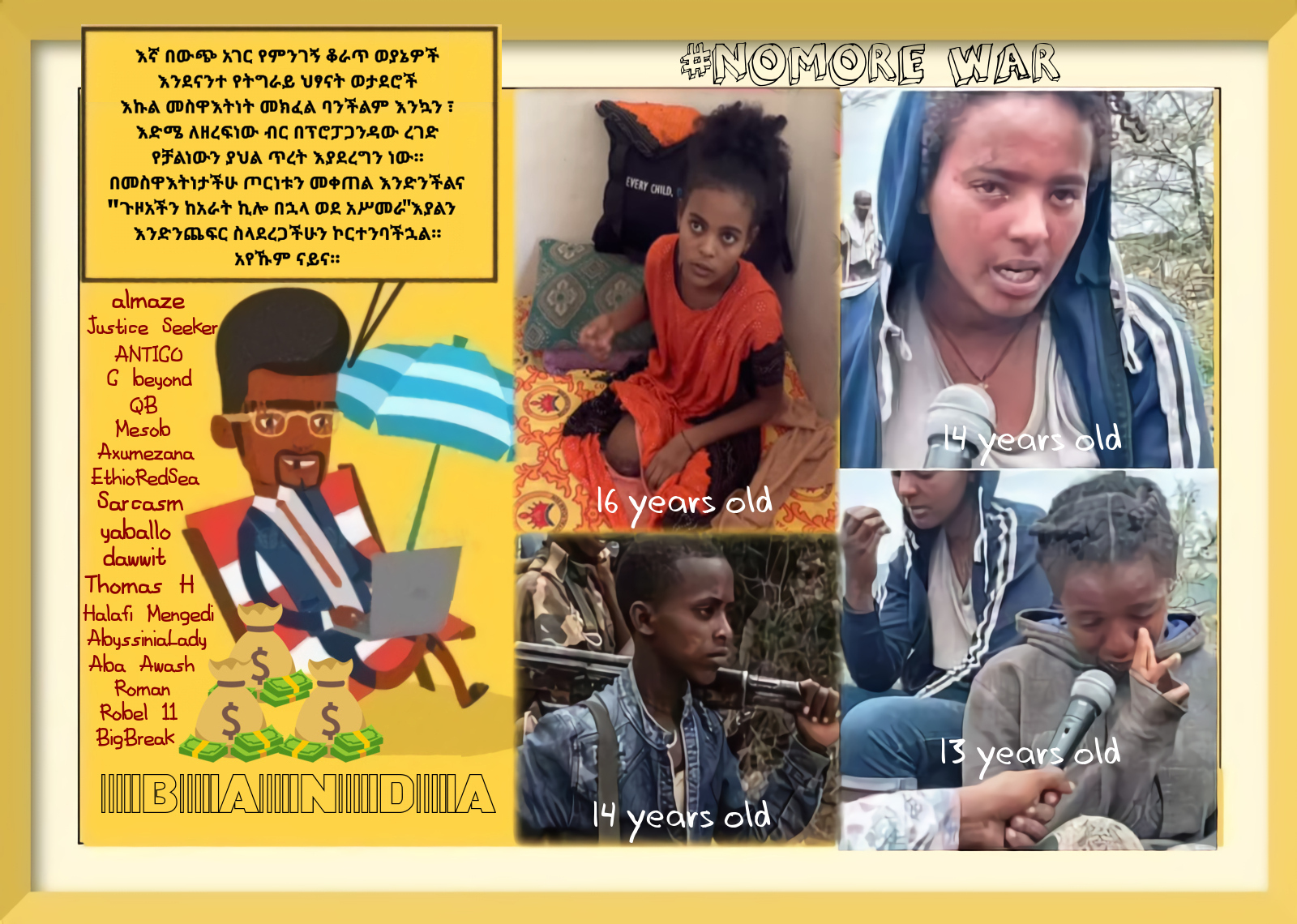