Biden vowed ‘no blank checks’ for Sisi, but Egypt’s recognition of Israel — and help on Gaza — has long fed a U.S. alliance despite human rights abuses.

Egyptian President Abdel Fattah Sisi sat at the head of the ornate room, on a chair that seemed slightly bigger than the rest, thronelike. Even through his COVID mask, it was clear he was not smiling.

His visitor, the first envoy from the new Biden administration, was relegated to the side chairs with other members of the U.S. and Egyptian delegations.

Secretary of State Antony J. Blinken had called on the notorious strongman, a military man whom former President Trump once called his “favorite dictator,” to thank him for helping stop a war between Israel and the militant group Hamas.

It was an awkward position for Blinken. Human rights, he has said repeatedly, are at the core of Biden-era foreign policy — and human rights are not something Sisi regards favorably. He jails and tortures dissidents, journalists and others, activists say, and has been accused of repeatedly ordering deadly fire on peaceful demonstrators.

But Sisi, as Egyptian leaders have before him, helped defuse violence between Israel and Palestinian groups. So Blinken made the high-level visit to offer thanks, which Sisi will attempt to leverage to influence Washington and to skirt criticism. During his campaign, President Biden promised “no blank checks” for Sisi, but Egypt has long parlayed its recognition of Israel into an alliance in which U.S. officials tended to look the other way when it came to abuses.

“Egypt played a crucial role in brokering the cease-fire,” Blinken said later in discussing his meeting with Sisi. He insisted that he raised human rights issues with the Egyptian leader. “We had a lengthy exchange on that with President Al Sisi as a reflection of the fact that it remains very much on the agenda with Egypt.”

Before the meeting late last month, reports had circulated among diplomats that Sisi would release a number of detained American citizens as a good-faith gesture. That did not happen.

Blinken and Sisi met for one hour and 45 minutes, with Sisi speaking for more than an hour without interruption, according to people familiar with the encounter. He extolled his own achievements in what he considers true human rights: making daily life better for ordinary Egyptians. Political rights or the right to dissent do not figure in his narrative. 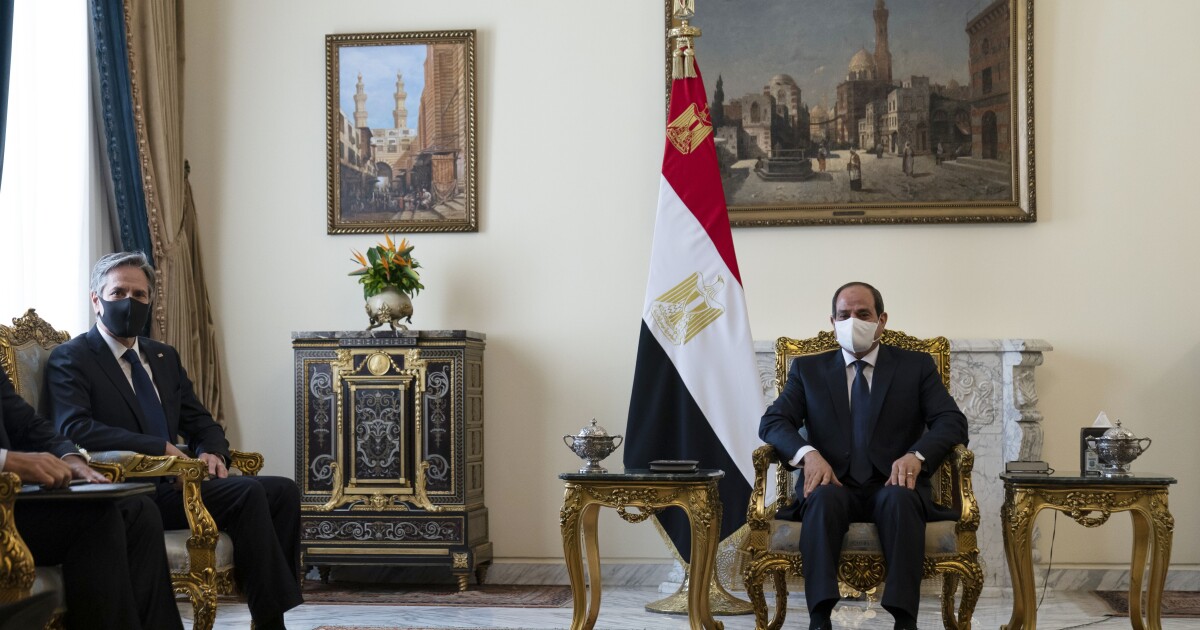 Secretary of State Antony J. Blinken, left, is seated to the side during a meeting with Egyptian President Abdel Fattah Sisi at the Heliopolis Palace in Cairo on May 26.(Associated Press)

Journalists accompanying Blinken on his trip were given about 30 seconds to view the initial seating of the meeting, but no more. Once during an earlier visit, Vice President Mike Pence answered a question from the attending journalists and invited Sisi to join in. The Egyptian was appalled at such openness, refused to engage and subsequently fired several palace aides who he blamed for allowing such an affront, according to diplomats.

This time, Sisi’s supporters in the mostly state-controlled Egyptian media celebrated Blinken’s visit and two telephone calls from Biden as validation of the government’s tactics and its recovered importance to regional diplomacy.

The reason many Africans call the Egyptian dictator Al-Sisi "The Arabic-speaking Agame", is because he was solely responsible for escalating the recent conflict between Israel and Palestine by supplying Hamas with rockets to fire into Israel, knowing full well the US would seek his assistance to end the conflict, by which time he would present a list of his demands, the Nile water dispute being on top of his list. That's what servile regimes do. They create a conflict and later appear as "peacemakers" just to get what they want.
Top
Post Reply
2 posts • Page 1 of 1