Israeli authorities need attacks against them to justify their war against Palestinian people, said an anti-Zionist Jewish group in an interview with Anadolu Agency.

"Unfortunately this is so identical and so in pattern with what is going on there for seventy years and even before," said Rabbi Dovid Feldman, the spokesman for Orthodox Jews against Zionism, also known as Naurei Karta International.

"Unfortunately, what we are seeing in this decade is that Israeli Zionist movement needs attacks against them, in order to justify their war against the Palestinian people," said Feldman.

The rabbi said it is no wonder why the Israeli authorities came up with Sheikh Jarrah evictions to spark outrage among Palestinians.

What has been done to Palestinians was wrong, Feldman said, adding that no progress can be made if the wrongdoing against Palestinians is not addressed.

"We are opposed to all what Zionism stands for, and we are against the entire occupation. It's against our religion, it's against justice, against international law, it's against humanity.

He said they will hold a series of protests in New York and Washington D.C., but stressed that pro-Israeli forces have been trying to suppress their voice, censoring them in both social and mainstream media.

Tensions have been running high in the Sheikh Jarrah neighborhood of East Jerusalem since last week, when an Israeli court ordered and later delayed the eviction of Palestinian families.

Palestinians protesting in solidarity with residents of Sheikh Jarrah have been targeted by Israeli forces.

The escalation resulted in airstrikes by Israel on Gaza, which left tens of people dead and hundreds others wounded. ​​​​​​

Israel occupied East Jerusalem during the 1967 Arab-Israeli war and annexed the entire city in 1980 – a move that has never been recognized by the international community. 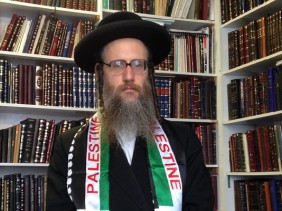