Cycling
Giro d'Italia, Africa by bicycle: three Eritreans in a group with the dream of the pink jersey 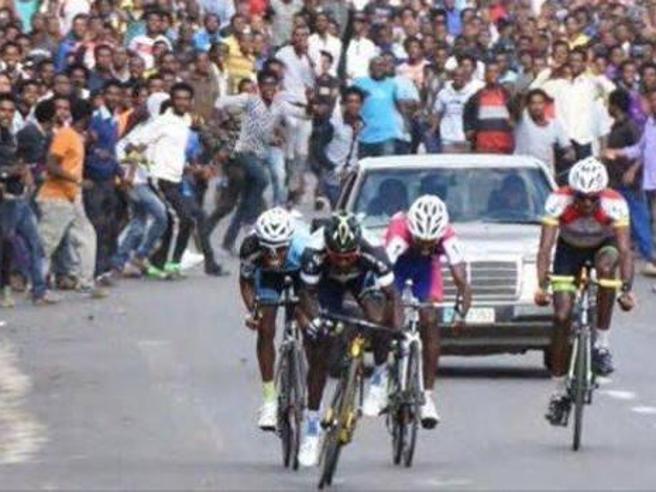 Tesfazion, Gebreigzabhier and Berhane competing with Androni Toys, Trek Segafredo and Cofidis: "In our country, races are more popular than football"


Becoming a cyclist, is the dream of every Eritrean child. If you don't succeed, you bet on running, another national sport. If you don't like it there either, you have to settle for football. I was playing football at 14, but when my father bought me a used mountain bike, I immediately gave up.

Natnael Tesfazion is 21 years old and the dorsal 37 stapled, on the Androni Toys shirt. His first Giro d'Italia will start today at 15.09, on the Turin time trial ramp. Fifty minutes later it will be the turn of his compatriot Amanuel Ghebreigzabhier, Nibali's bodyguard, while Natnael Berhane of Cofidis will start among the last ones after Evenepoel and Ganna. Three boys from the same nation in the Horn of Africa, on the roads of the pink race.

The Belgium of Africa

If Eritrea is to African cycling like Belgium to European cycling, https://www.corriere.it/sport/21_maggio ... 1f8f.shtml it is partly the fault of us Italians who, after invading the country at the end of the nineteenth century, also imported cycling races in the thirties which, in the intentions of the Duce they had to, like the military, show the physical superiority of the Italian athlete. The first hero of Eritrean cycling was the farmer Gebru Ghebremariam who, in 1939, humiliated the well-fed Italian professionals convinced they would make it to the Eritrean Cup. It was he who inspired Merhawi Kudus and Daniel Teklehaimanot https://www.corriere.it/foto-gallery/sp ... tml?ssoAt= the first black Africans to tread the roads of the Tour de France, in 2015.


In Asmara and Addis Abeba there are as many mechanics as there are grocery stores - explains Tesfazion - and you go by bike to work, to the market, to school. Saturday and Sunday the city is blocked to let the races pass and no one protests.

At the dirt roads of the Campo Felice and Montalcino stages, Natnael and Amanuel look with serenity having pedaled on much more bumpy roads.


they sent me to race in China to gain experience. At 20 I won the Tropical Amissa Bongo in Gabon and made the second one in the Tour of Rwanda: I have never seen so much dust and so much public in my life, the route looked like a 1000 kilometer long stadium. All of Africa is crazy about bike racing.

Opponents on the road, the three Eritreans share the same apartment in Lucca.


We cook, shop and clean in turns


training with other professionals from our country. At the end of the season we go home: Tuscany is beautiful but the roads are dangerous. In Asmara and Addis Ababa there is no traffic and we take advantage of the high ground without having to go to the mountains.

The veteran Berhane, 30, says he acquired the mentality of the rider thanks to a scholarship from the federal World Cycling Center in Aigle, Switzerland:


It was rough but important


and there they taught me the tricks of the trade, to pedaling in the rain, not to fear the snow. With us the human potential is so high and the passion so strong that if we had bikes and coaches we would be for cycling what Kenya is for athletics. https://www.corriere.it/notizie-ultima- ... 8362.shtml

At the Giro d’Italia Tesfazion and Ghebreigzabhier will be at the service of the Ecuadorian Cepeda and Nibali, while Berhane will have more freedom from his Cofidis. Everyone's dream, is to be the first Eritrean to win a stage in a grand tour. 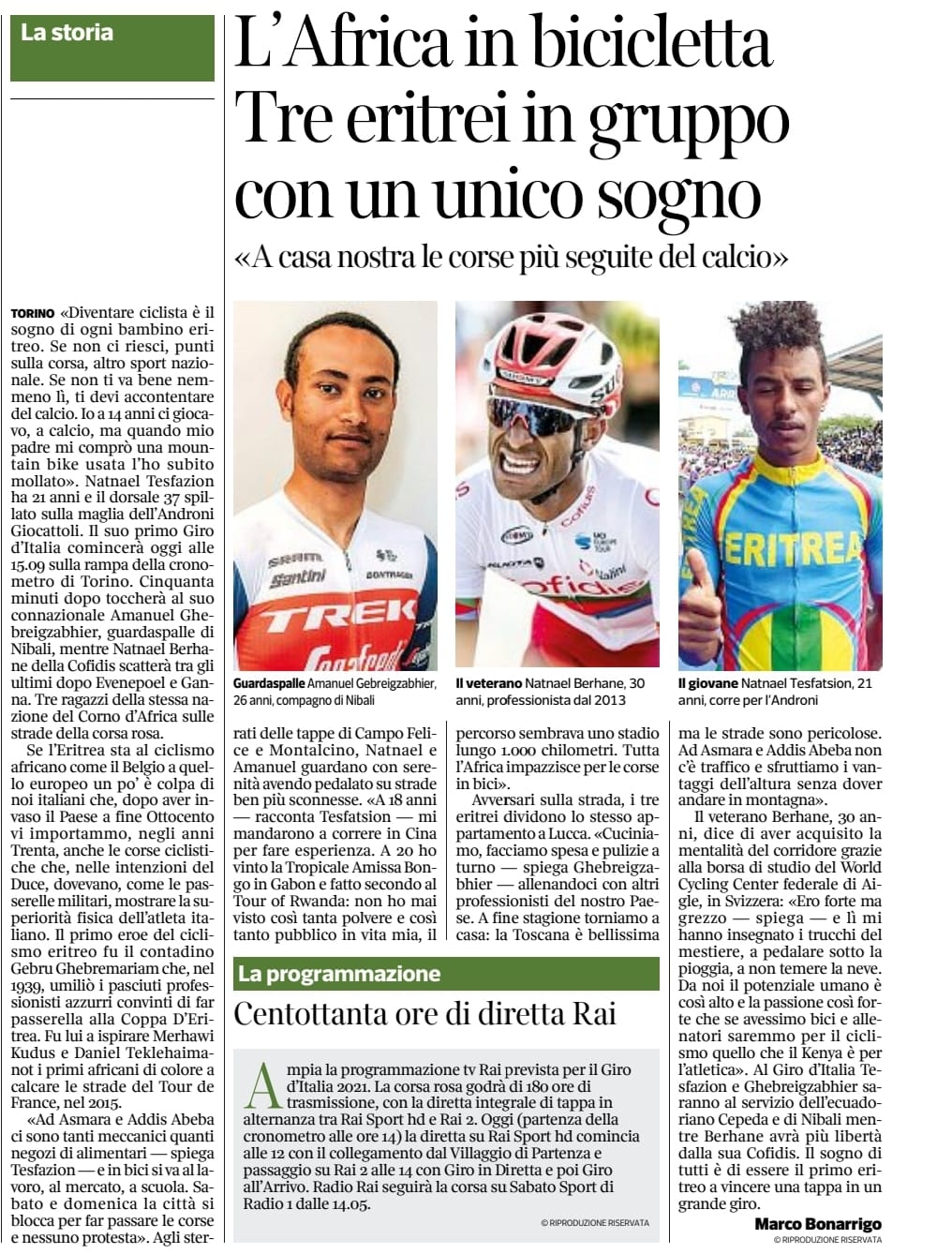 Alexander Isak takes a place in this year's team - with Messi Alexander Isak has scored a bunch of goals in the league, during the season.

Now he is rewarded with a place in this year's team in the Fifa game - with names like Lionel Messi and Luis Suarez.

At the same time, he gets a major rating update in Fifa 21.

Alexander Isak's success for his Real Sociedad during the season, has escaped few. The 21-year-old has accounted for 14 goals and two assists so far, and is the sixth best goal scorer in the league.

Now EA Games has released this year's team, for the league in Fifa 21. Alexander Isak will take his place together with players like Leo Messi, Karim Benzema, Casemiro and Jan Oblak.

Players can complete in-game challenges to unlock the "Team of the Season" version of Alexander Isak in the game, with an upgraded rating update.

Isak's total score now amounts to a full 92 with the special card, compared to his previous rating of 79. 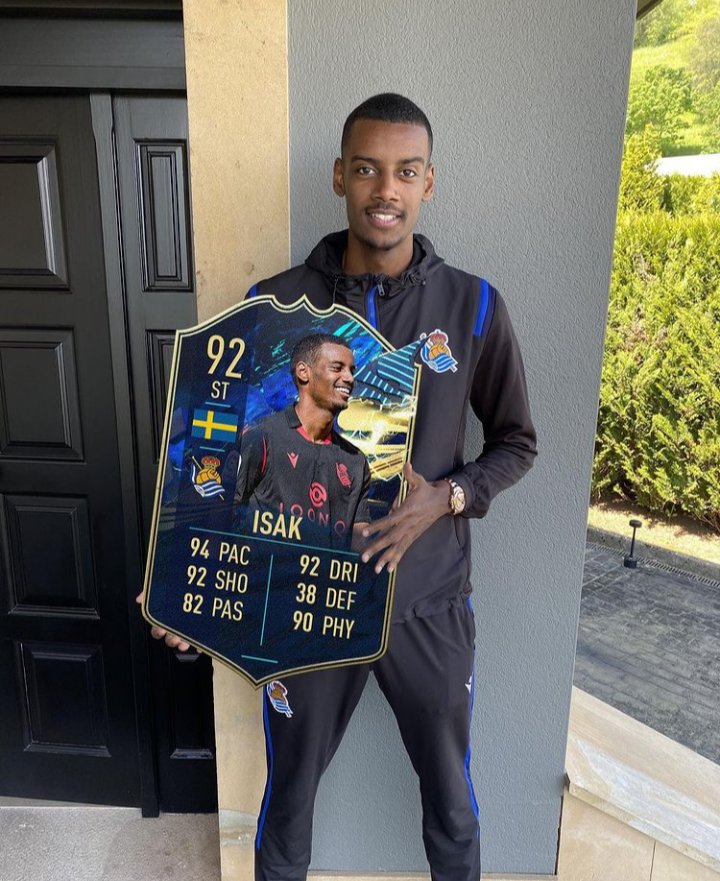 How to get Alexander Isak's, special card

For those players who want to get hold of the special version of Alexander Isak, you need to complete a total of five missions in Live Fut Friendly: La Liga Links, writes Dot Esports. These are:

• Score goals in eleven separate matches with players who have at least four-star skill moves. 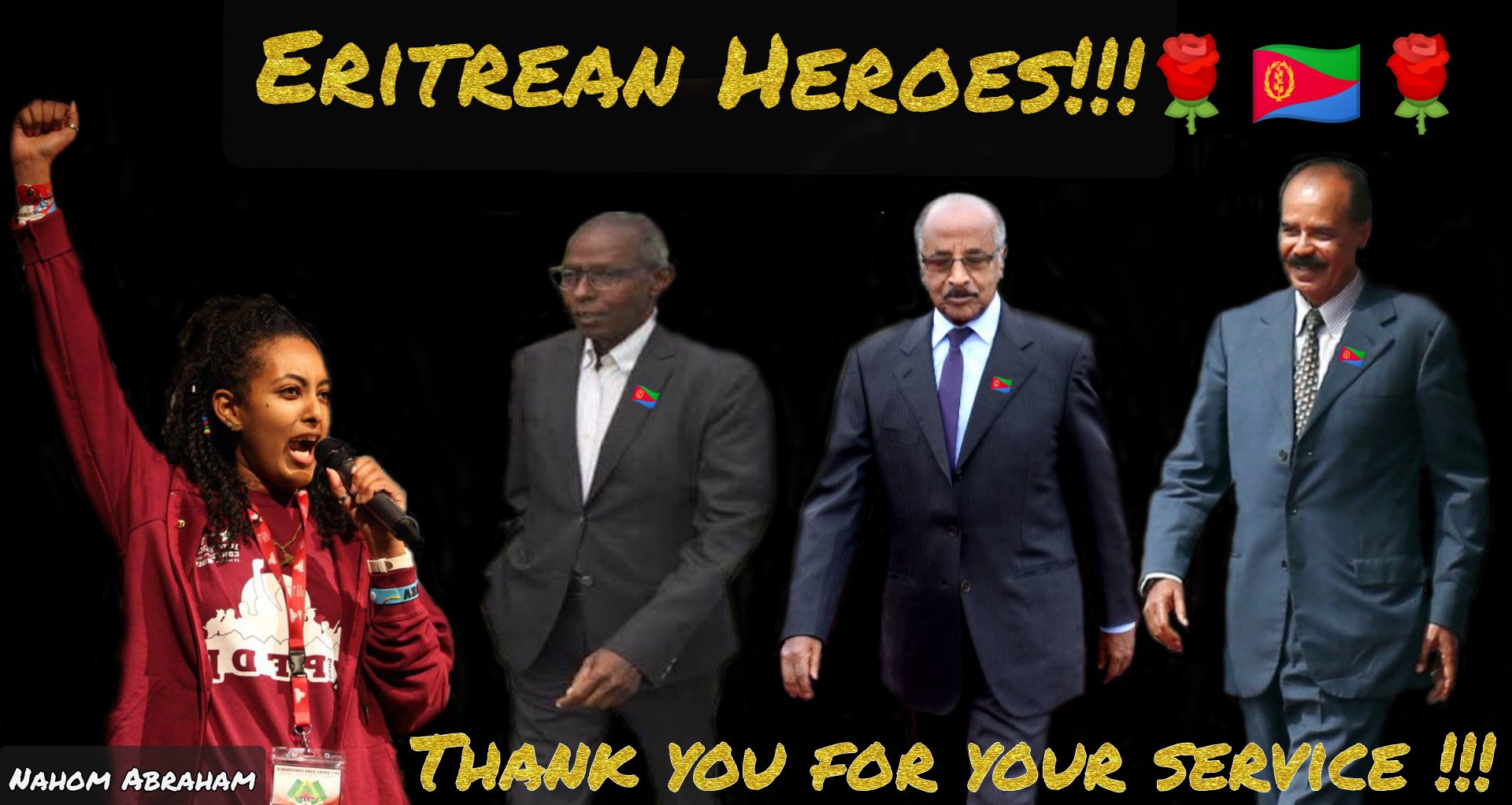 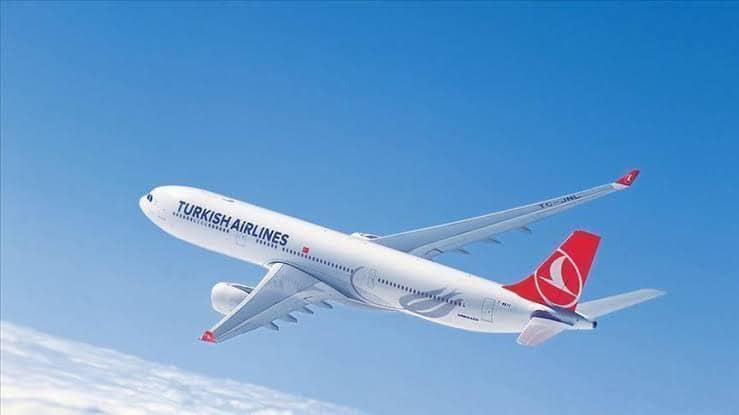 Turkish Airlines İstanbul - Asmara direct flight, starting from May 25. Once a week, every Tuesday. Via: Muhyeddin Mihe
Top

Amanuel Ghebreigzabhier at the Tour of the Alps

Amanuel Ghebreigzabhier is one of many promising stage racing talents to come out of Eritrea over the last decade.

Eritrea is fast becoming a prominent force in world cycling.

There are currently six riders from the African nation in the top two tiers of cycling and three of them are set to ride the Giro d’Italia – more than for Canada and almost as many as the U.S.

One of those flying the Eritrean flag in Italy will be up and coming GC talent Amanuel Ghebreigzabhier, who is riding for Trek-Segafredo to support pre-race favorite Vincenzo Nibali. It is his third grand tour after a previous Giro appearance and one ride at the Vuelta a España.


I am excited for the Giro. I am confident that I am in my best ever shape, more than at any time,

Ghebreigzabhier told VeloNews on the eve of the race.


It is one of the hardest races in my life, but I also enjoy the race.

I am here to work for Vincenzo Nibali and I’m really happy to work for him. He is a nice person and leader so I will give everything for him.

While he might be working for Nibali, Ghebreigzabhier could be given some freedom to race on a day where the GC contenders are unlikely to cross swords. Ghebreigzabhier is still searching for his first ever professional win, outside of his national championships, and he’s keen as ever to ensure 2021 is the year.


For sure, to win a stage of a race this year would be my main goal. I was in good shape and my morale and I have a lot of motivation. Maybe in the Giro I can win a stage,

From Eritrea to the WorldTour

Ghebreigzabhier is a fourth-year professional after stepping up to WorldTour level with the Dimension Data squad, like many of his compatriots, in 2018. His English is spoken with an Italian lilt, thanks to several years of living near the team’s base in Lucca.

Right from his debut in the WorldTour, Ghebreigzabhier has shown promise as a stage racer and overall contender with top 10 finishes in the youth classification at the Tour de Romandie and the Criterium du Dauphiné in 2018. The following year he was able to climb with the best to finish sixth overall at the Vuelta a Burgos, just over a minute behind winner Iván Sosa.

His performances caught the eye of Trek-Segafredo. He transferred to the squad during the winter and has been fast-tracked into Nibali’s support line-up. The move was something of a full circle for Ghebreigzabhier, who began riding on the equipment from the American manufacturer.


My first bike was a Trek,


Trek is a very famous bike in Eritrea. A lot of riders ride Trek in Eritrea and all of the local teams are using it and so is the national team.

Ghebreigzabhier was introduced to cycling as a teenager by a friend and began riding on mountain bikes, before he turned his attention to the road. His formative cycling years coincided with Teklehaimanot’s breakout on the world stage, and he has fond memories of the climber returning to his home country to race against the local riders.


I have a lot of memories from riding in local races in Eritrea, when I was young. I remember seeing a lot of riders there, especially Daniel Teklehaimanot,


At the time, he was racing for the GreenEdge team.

It was great because he had gone from racing locally in Eritrea, to racing with GreenEdge in the WorldTour. He raced with local riders and the local riders, used to fight against him. I have a lot of good memories about him in Asmara, in Eritrea.

The growing number of Eritrean riders in the peloton provides a sense of national pride for Ghebreigzabhier, but it also gives him a sense of normality and home. For the Italian, French, German, Dutch and English speakers, finding another to converse in your native language is easy.

It can be easy to take for granted but when you don’t speak one of the core languages of the peloton, finding a fellow speaker can be priceless.


I miss speaking my own language, sometimes. Sometimes, if you have relaxation time you can speak with them. That’s important to me, to speak my language. I’m really happy, to race with them.