A Shepherd who Scatters his Sheep: Why is Cardinal Berhaneyesus Silent in the Face of State-Sponsored Starvation and Sexual Violence?

“Woe to the shepherds who destroy and scatter the sheep of my pasture!”

One of the most enigmatic and troubling questions that the Tigrayan Christian faithful have had to wrestle with in recent days has been the actions and stance of Cardinal Berhaneyesus Demerew Souraphiel.

Even before the beginning of the war on Tigray, on 4th November 2020, the Cardinal’s stand in relation to the political turmoil within the country was very puzzling. His actions and choices at various important junctures seemed to be oblivious to his pastoral responsibilities as a clergyman and the highest representative of the Roman Catholic Church in Ethiopia. His Eminence seemed to not only chose to associate with and identify with the politicians of the day but to also repeat and affirm highly politicized and divisive narratives both through his own public addresses and through his participation in politicized associations and public events intended for propaganda purposes.

In doing so Cardinal Berhaneyesus has not only been unable to speak truth to power to voice the injustice and the misery that has beset the country and the flock that he has been appointed to be a shepherd over but he has not even seen it fit to recuse himself from the company of those doing the gravest injustices. This terrible failing to do the minimum of what is expected from a religious leader has become even more glaringly obvious in the stance Cardinal Berhaneyesus has adopted in relation to the ongoing war in Tigray.

At the very outset of the war, many were shocked when the Ethiopian Reconciliation Commission – chaired by the Cardinal declared that any calls for negotiations from the TPLF ‘junta’ (the derogatory label given to the main political party and leaders of the Tigray region) were unacceptable and by issuing a statement of support for the war. This statement was notable not only because it came from a commission set up with the express aim to achieve alleged national reconciliation declaring opposition to peace negotiations but also because that commission was chaired by a Cardinal of the Catholic church. 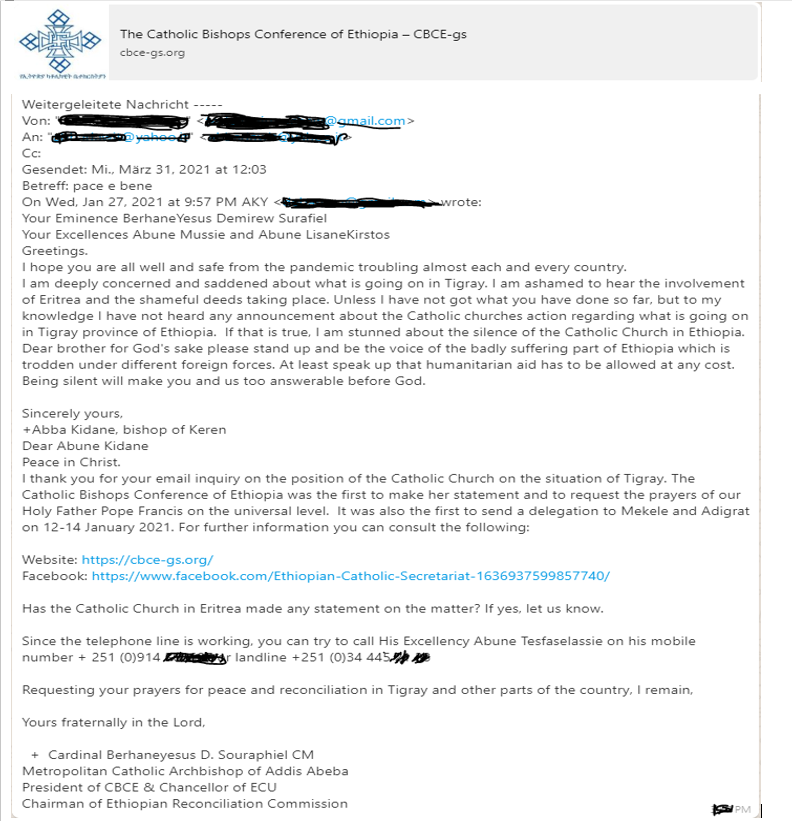