All Glory To The Almighty Our Creator!!!

By now, most of you must have already heard/read the news of the capture of one of the most ardent and peddlers of the satanic ideology of communism, Sebhat Nega. Now, some of you bigots may be flopping your cursed jaws complaining to see an elderly man in handcuffs. Listen you demons!! That is a worldwide requirement because you never know what the prisoner may do on his way to jail. There are boatload of incidences where criminals suddenly turned dangerous and harmed the arresting officers and themselves. We have seen convicted high position officials handcuffed on their way to jail. That is done first of all to protect the prisoner him/herself.

But what a happy ending for those of us who monger for harmony between ethnic group!!! What a day of celebration for many of us who cling to the faith that we are all the Creation of The Almighty and not one worm that suddenly crawled out of the sea. What a victorious moment for those of us who believe that the beginning of humanity is Adam and Hawwa(Adam and Eve) and it all started with individuals created by The Almighty and not some commune that suddenly and miraculously congregated in 'socialist' order!!! When some of you read this comment you may ask like 'Hey Ittu, you are being too traditional'. My answer to that is 'You are right that I'm traditional. Why? Because The Almighty Our Creator is traditional. In absolute terms he is so perfect and never needs to alter his ways'. This elderly man and his peers who later founded other communist parties were raising the name of Our Creator in vain since the 1960's. Most of them perished on their own accord either due to fighting among themselves or misadventures of stupid bravado. They replaced the Holy Scriptures of both religions with Das Kapital. They poisoned the minds of the gullible youth with such evil ideology where millions marched themselves into awaiting inferno. They built up the ego of the tender youth to the level that it can strike victory with bare hands. What we are witnessing now is such sense of being absolutely invincible has finally caught up to the preachers and ideologue of this twisted philosophy themselves. They have come to a full circle. Those of you, who doubt the power of The Almighty, take a note now!!! Kudos to the noble, upright and religiously devout people of Tigray for leading the patriotic forces to the woodwork where these demons were hiding!!! The Alula incarnate Mulu is running on all well oiled cylinders, y'all!!! There is more to come! Just sit back and watch the show!!! I am!!!
Top

I am sorry I forget to growl and yawl sticking out my index finger like in the good ole days with inmate number(Hey Patriot Jula, what is Aboy Sebhat's number in prison?) with 'Victory For The Masses!!! Down With Imperialists!!! Yankees Go Home!!! Workers of The World Unite!!! Like Khrushchev allegedly told western diplomats in the 1950's that their children will be communists. That was almost 70 years ago. Guess who is left standing tall and had the last laugh? So goes Karl Marx Sebhat on the way to his permanent home with, 'You people of Tigray! You betrayed me now. We will bury you and your children will be communists!!! You too people of Ethiopia!!! Your children will establish a communist state with a proletariat dictatorship!!!' What is that thing Sebhat and the late PM were schlepping since the 1970's. That thing, that thing!!! That snake oil and a cover for looting thing! Yea, that 'Revolutionary Democracy' thing? Oooooweeeeeeeeyyyyy!!! Comin atcha with that one!!!!!
Top

Abay Woldu, the man with Nacht der langen Messer on opponents is in the bag y'all!!! The dragnet is said to be tightening on the one who signed the Algiers Treaty and later back tracked by denying to hand over a territory he was told not his, Zhou Enlai Seyoum Mesfin. There are also rumors in the hood that Enver Hoxha Abay Tsehaye is toast already. It is also said that the Lavrentiy Beria Getachew Assefa had betrayed his friends in these trying days and slipped into Sudan and is living there under an assumed refugee name. He is known to be very knowledgeable in disguises. Who knows, he may even have tried to contact his old pal Don't You Cry For Me O Susanna and loyal bosom buddy self-hating Herman(n) so they will help in processing his asylum application move faster. All the Ibsas and Gutemas can come handy for him in that regards. After all birds of a feather flock together, right folks? What happened to all that braggadocio ‘The Golden Race’? Golden Race is being picked apart by the rusty race, y’all!!!!
Top

Where did all that bravado go? All that 'we will fight to the last man' daring? You see, that was what I exactly saying about our despots and demons. They are the best that country ever produced in case of conniving and inciting the gullible youth around them so it will fight to the death on their behalf but when it comes to manning up they are the most cowards that glorious country ever hatched. Mengistu was said to have bragged to his close boot lickers showing one bullet in his handgun and how he would take his own life with it if he was ever surrounded by his enemies. Who was the one that ran like rabbit when barbarians were at the gate? The same with these demons. Just less than three months ago they were having one huge military parade after another daring the rest of the country to come and fight. Their international media outlets BBC, AFP, Reuters and Al-Gahba/Zanwas were telling the world that Chairman Debre had more than 250,000 seasoned, battle hardened and well armed army and could over run any invading army that dared to set its foot in Tigray. Well, well, well!! What we have witnessed is a Jula/Bacha/Turbo/Tesfaye battle plan that will go down in military history as one of the most ingenious. It is guaranteed to go into the military text books in educating future military leaders just as the Battle at Adwa of 1896. These four geniuses and their over qualified colleagues did not need 15,000 Cubans, a South Yemeni tank brigade and Soviet generals to shatter a bunch of bigots to smithereens. It is in their DNA they inherited from Dinagde, Mikaeel/Mohammed Ali, Mekonen, Alula, Tekle of Gojjam and off course Gobena(Hey bigots, go jump in the lake!). These demons should have listened to what their fathers had told them where they were kids. You don't pick a fight you know you gonna get kicked in the [deleted] real bad and fast. What I want to see in the crimes these goons will be charged with also includes responsibility for the demise of tens of thousands of the youth they misled into a disastrous war. They should also be charged for the destruction they brought upon that region and its innocent people. They were military commanders and therefore they should be tried in a military court. At one point or another they had taken oath to live by the tenets of the military. Whatever verdicts handed down by the military tribunal should stand as the final. Period. These demons did not murder individuals only but have committed well documented mass massacres before. Ethiopian Lives Matter!!!!
Top 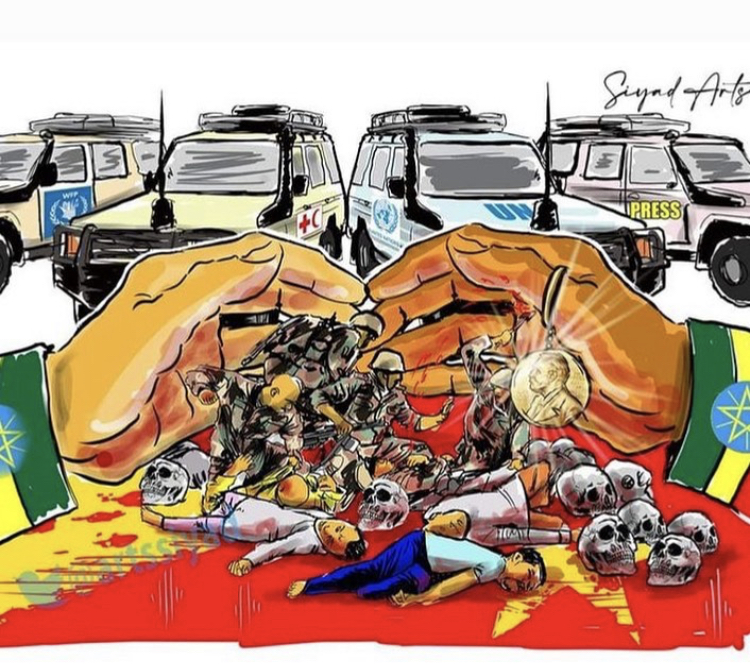