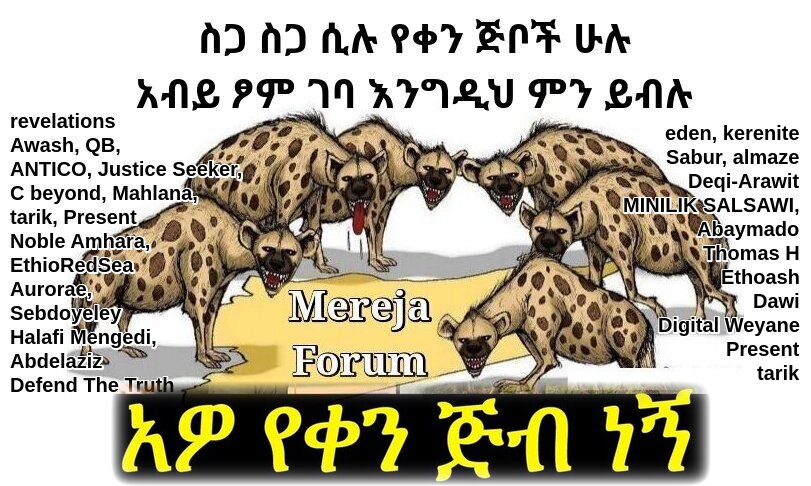 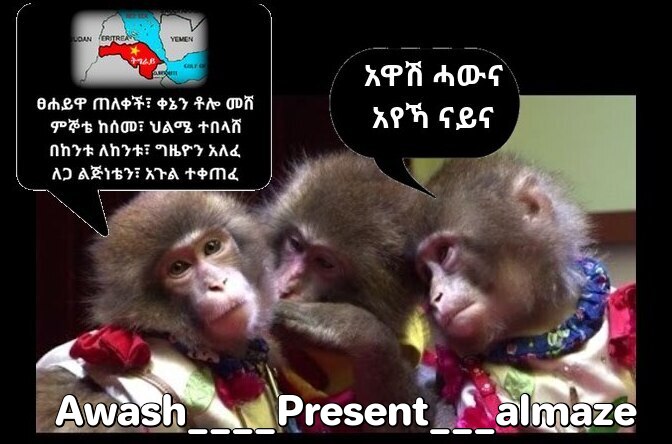 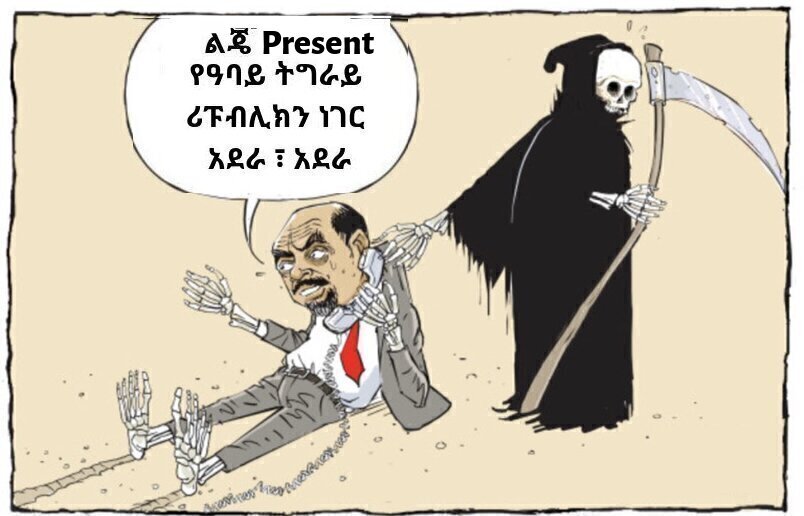 You Ascari tplfs are killing Tigreans, but Tigreans keep saying "Ethiopia First" and they are dying for it!! 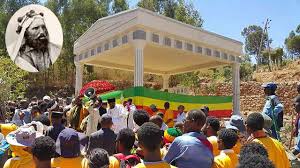 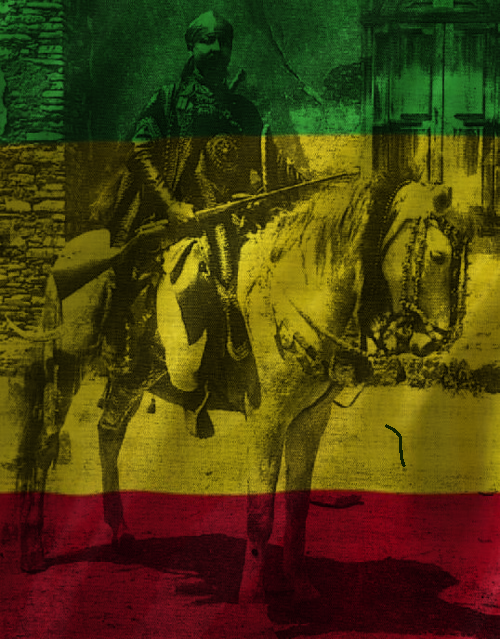 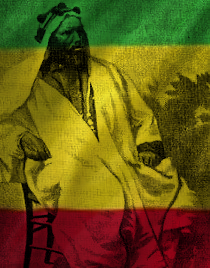 Woyane rebellion (Ge'ez: ቀዳማይ ወያነ) was a rebellion in Tigray Province, Ethiopia against the government of Emperor Haile Selassie which took place in September–November 1943. The rebels were defeated with the support of aircraft from the United Kingdom's Royal Air Force.

In an Imperial determination to weaken the power of the regional nobles and elites of Ethiopia, the Haile Selassie government in 1941 introduced a new regional administration. The law or edict provided for fourteen provinces, around 100 counties, and 600 districts.[1] This then enabled Haile Sellasie to centralize his authority and in effect rendered these nobles with their administrations dependent on the central government. Historians agree that


the basic policy of Haile Sellasie was a centralizing one continuing the tradition of the great centralizing Emperors from 1855 onwards.

The provision reduced the many provinces of Tigray into eight counties: Raya Azebo, Enderta, Tembien, Kilete Awla'lo, Agame, Adowa, Axum and Shiere along with many districts under each of the counties' jurisdictions. After the liberation of Ethiopia from Italian occupation by British forces in the East African Campaign in 1941, Ethiopia saw many rebellions break out in different parts of the empire.

The Woyane uprising in Tigray seems to have arisen when administrative corruption and greed ignited a situation of existing instability and insecurity, one awash with weaponry in the wake of the Italian defeat.[3]

Their proclamation after liberating Mekelle had five main points.

• Eradication of thieves and bandits

In 1943, open resistance broke out all over southern and eastern Tigray under the slogan,


there is no government; let's organize and govern ourselves.

The rebels established their headquarters at Wukro. During the rainy season of 1943, the rebels under the leadership of Fitawrari Yeebio Woldai and Dejazmach Neguise Bezabih, hailing from Enderta,[6] which was the heart of the woyane rebellion,[7] were busy organizing their forces; and after celebrating the Ethiopian New Year on September 12, they went on the besieged government garrison at Quiha. The highly equipped government forces were to meet with the poorly equipped but determined rebels' for the first time in the rebel's stronghold district of Didiba Dergiajen, Enderta in the village of Sergien; the rebels under Fitawrari Yeebio Woldai (Wedi Weldai) and Dej. Neguisie Bezabih defeated the government forces decisively; they captured countless modern weapons that helped them attract many peasants to join the rebellion; and many government soldiers deserted and joined the rebellion. In the month of September 1943, on the government's second offensive in the village of Ara, also in Enderta, the woyane rebels under Wedi Woldai scored yet a second victory over the heavily armed government forces; this time however, the rebels captured high level feudal chiefs including and killed many prominent Tigray and Amhara war lords that sided with the Emperor Haile selassie's government. The rebels under Bashay Gugsa Mengesha also captured General Essyas and many of his commanders and imperial soldiers at Quiha. The rebel forces estimated at 20,000, moved eastward from Quiha to Enda Yesus, a fort overlooking the provincial capital, Mekelle. They captured the fort and then took Mekelle. The representatives of Haileselassie's government fled. Woyane issued a proclamation to the inhabitants of Mekelle which stated, inter alia: Our governor is Jesus Christ... And our flag that of Ethiopia. Our religion is that of Yohannes IV. People of Tigray, follow the motto of Weyane.

A similar victory was achieved by the rebels under the top leaders of the woyane movement namely Dejazmach Negussie Bezabih and Bashay Gugsa Mengesha again in the district of Hintalo and Wajerat in Enderta; the rebels defeated the heavily armed government forces numbering in thousands and aided by British air power, the rebels were able to capture and acquire yet again heavy modern armaments. By September 20 the successful Woyane rebel army was ready to turn south to face an Ethiopian force attempting to advance to Tigray. Haile Selassie had ordered his minister of war Ras Abebe Aregai, to take charge of the campaign against the rebels. The Ras rushed northward and arrived at Korem, south of Maichew, on September 17 but his way was blocked by rebels. During the next three weeks, the Weyane forces fought hard against Ras Abebe's Ethiopian troops, who were bolstered by a small contingent of British officers and specialists.[8] The fighting centred on the great natural fortress of Amba Alaji. Basha Gugusa, one of the first Woyanne leaders, led the battle of Amba Alage in the month of September 1943 to victory over Imperial army which was well equipped and supported by British air power. The Woyane forces outnumbered those of the government, but their advantage in numbers was offset by artillery and British air power.

The Woyane leaders precipitated the final decisive battle by launching a three-pronged attack on government positions with perhaps 10,000 men. The war is spread to Alaje in Raya, Wukro in Kilte Awlalo, and Tembien where by the rebels mostly peasants beat the huge government forces equipped with tanks and modern weapons led by Ras Abebe Aregai, General Abebe Damtew and aided by British Col. Pluck. The total annihilation of government forces heavily supported by the British army sent a signal to the Emperor, that


the Tigrayans weren't only brave fighters but also astute strategists

said Hailemariam when he gave an interview to Wegahta magazine.[9]

Countless British officers [peacock term] were killed including Col. Pluck who was killed by a Woyane rebel. The inability to subdue the rebellion prompted the Emperor to authorize an aerial bombardment by collaborating with the British Royal Air Force based in Aden which were able to operate a number of Bristol Blenheim's.[10] On October 6, fourteen bombs and eight days later fifty four bombs were dropped in the provincial capital Mekelle respectively. On October 7, sixteen bombs and two days later thirty two bombs were dropped in Corbetta Raya and Hintalo Enderta respectively as well, though they were devastating mainly to civilians with thousands of people killed, they did not however, crush the rebellion.[11] Although the rebels scattered and battle formations began to disintegrate on October 7, uncertainty still affected the Ethiopian government forces and Ras Abebe did not personally move out of Korem until October 9. He then moved systematically northward and entered Quiha and Mekelle on October 14, capturing the erstwhile rebel headquarters at Wokro on October 17.[8]

Ras Abebe Aregai was appointed as governor of Tigray and was given authority with the pacification of that province. His pacification was brutal. The punishment for the uprising severe as it may be with the aerial bombardment, the people were obliged to pay large sums of money and their land was confiscated and distributed to loyal gentry as a punishment and deterrent to future revolt. A new taxation was imposed that 'cost the peasants five times more than they had under the Italians during the occupation.[12] Ten Woyane rebel leaders were captured and sent to prison in Debrebirhan. Including the top leaders, Basha Gugsa Mengesha, Dej. Bezabih Negussie, and Hailemariam Reda.[13] Bashay Gugsa was also not allowed to return to Tigray, because the central government feared his influence.[13] However, the central government tried to make use of his military skills and sent him with a group of soldiers to suppress other rebellions in the southern Ethiopia.[13]

Although the Woyane rebellion of 1943 had shortcomings as a prototype revolution, historians however agree that, the Woyane rebellion had involved a fairly high level of spontaneity and peasant initiative.[14] It demonstrated considerable popular participation, and reflected widely shared grievances. The uprising was unequivocally and specifically directed against the central Shoan Amhara regime of Haile Selassie I, rather than the Tigrayan imperial elite.[15]

4. Mamoka Maki, The wayyane in Tigray and the reconstruction of the Ethiopia government in the 1940s, In: Proceedings of the 16th International Conference of Ethiopian Studies, ed. by Svein Ege, Harald Aspen, Birhanu Teferra and Shiferaw Bekele, Trondheim 2009, p. 5.

6. Mamoka Maki, The wayyane in Tigray and the reconstruction of the Ethiopia government in the 1940s, In: Proceedings of the 16th International Conference of Ethiopian Studies, ed. by Svein Ege, Harald Aspen, Birhanu Teferra and Shiferaw Bekele, Trondheim 2009, p.5.

7. Mamoka Maki, The wayyane in Tigray and the reconstruction of the Ethiopia government in the 1940s, In: Proceedings of the 16th International Conference of Ethiopian Studies, ed. by Svein Ege, Harald Aspen, Birhanu Teferra and Shiferaw Bekele, Trondheim 2009, p.6.

8. Rebels and Separatists in Ethiopia, Regional Resistance to a Marxist Regime by Paul Henze, Rand corporation-- prepared for the office of the under secretary of defense for policy, p. 42, December 1985.

13. Mamoka Maki, The wayyane in Tigray and the reconstruction of the Ethiopia government in the 1940s, In: Proceedings of the 16th International Conference of Ethiopian Studies, ed. by Svein Ege, Harald Aspen, Birhanu Teferra and Shiferaw Bekele, Trondheim 2009, p.8.

You calling them Eritrean or whatever, will not change the fact that they'll all one day be hunted down & justice applied on them accordingly.

present wrote: ↑
22 May 2020, 21:15
All tplf leaders are Ascari Eritreans, presently hiding in hotel mekele, after preaching greater Tigray for 27 years

For the first time ever, I agree with you on this one

Zmeselo wrote: ↑
22 May 2020, 21:56
You calling them Eritrean or whatever, will not change the fact that they'll all one day be hunted down & justice applied on them, accordingly.

present wrote: ↑
22 May 2020, 21:15
All tplf leaders are Ascari Eritreans, presently hiding in hotel mekele, after preaching greater Tigray for 27 years