Surveillance will not save us from COVID-19

The use of tech-based surveillance to fight the virus can exacerbate the suffering of the most vulnerable communities.


As COVID-19 continues to devastate the world, a growing number of countries are opting to use invasive surveillance methods to stem the spread of the virus and "flatten the curve".

Since the emergence of the novel coronavirus, several countries, led by Israel, China, Singapore and South Korea, started collecting security camera footage and bank records and using facial recognition technologies and mobile phone data to track the movements of their citizens. Australia recently joined this trend by releasing Covidsafe, a "coronavirus tracking app". The UK is also known to be trialling a similar mobile phone app to increase its contact-tracing abilities and get its population back to work.

In countries where the majority of the population is not used to being subjected to overt mass surveillance, the discussions surrounding the implementation of these measures has focused on "privacy".

But there is reason to be concerned about this new wave of surveillance beyond privacy. Unless we acknowledge the role surveillance plays in perpetuating structures of oppression, the use of tech-based surveillance methods to tackle the virus will serve to exacerbate the suffering of the most vulnerable communities.

We can see what surveillance is really for, and who usually pays the price for it, simply by looking into its history.
Surveillance as a colonial strategy

Surveillance emerged as a colonial strategy. It was essential for the classification of people and the control of the newly acquired territories.

From the 14th to the 19th century, European colonisers amassed vast quantities of data on the populations they colonised. The most basic tools of surveillance, such as fingerprinting, census taking, map-making and profiling, were refined and implemented in colonial settings by the Dutch in Southeast Asia, the French in Africa, and the British in India and North America.

The British, for example, collected data on caste, religion, profession and age among other classifying characteristics across colonial India. This information was used to solidify inequities of the caste system, and increase religious tensions; essentially to divide and rule.
Surveillance as a tool of scientific racism

In the 19th century, surveillance tools developed in the colonies were used by European governments to classify populations according to innate biological traits, and construct racial hierarchies, both in the colonies and at home. During this time, surveillance aided the implementation of discriminatory policies based on what we now call "scientific racism" and contributed to the development of pseudo-scientific justifications for white supremacy.

In Australia, for example, white colonisers used "scientific" theories based on surveillance data to justify massacres of First Nations people, land theft, removal of children from families, and erasure of language and culture. Over time, they established a racialised hierarchy of citizenship, and started granting citizenship rights and associated benefits based upon whiteness. They eventually banned all non-white migrants from entering the country. The "White Australia policy", which enshrined this racial hierarchy of citizenship in law, only officially ended in 1973.
Surveillance today

Today, surveillance is still being used as a tool to classify people into various zones. Thanks to the "architectures of oppression" that surveillance help built, some people remain safely in "zones of access, inclusion and privilege" while others remain stuck in "zones of invisibility, exclusion and death". Rapidly developing surveillance methods are helping governments keep "undesirable" migrants and refugees outside of their countries' borders, and internal "undesirables" - members of minority communities and the poor among others - inside prisons, detention centres and racialised ghettos.

The continuing coronavirus pandemic has only accentuated this problem.

A disproportionate number of people of colour have died from COVID-19 in the US and Britain. Millions of people stuck in prisons, detention centres and refugee camps across the world have been left to fend for themselves, despite expert warnings that the spread of the virus could be deadly in these contexts.

In many countries, security forces focused their efforts to enforce coronavirus-related restrictions on underprivileged communities. In Australia, Indigenous peoples and migrants are being disproportionately targetted for public health order compliance fines. In the US, there are widespread reports that police officers are using coronavirus stay-at-home orders and policies making masks mandatory to harass and abuse Black Americans.
The new surveillance state and the reordering of society

The rolling out of mass tech-enabled surveillance will help governments expand the existing systems of surveillance and discrimination, which have long been reserved solely for marginalised groups, to their entire populations. Israel, for example, is now using the surveillance tools it developed to monitor Palestinians in the occupied territories to track the movements of the country's entire population.

If the tech-enabled surveillance wave triggered by the coronavirus pandemic continues unchallenged, the governments could not only use these new surveillance opportunities to increase the isolation and oppression of already marginalised communities, they could also create new groups of "undesirables" and restrict their access to most basic rights and services.

China's Alipay Health Code is one example of how biometric data collection could be used to determine who gets to work, travel and exist freely in a society. It assigns people a colour code - green, yellow or red - that indicates their health status. Banners remind everyone of the rules: "Green code, travel freely. Red or yellow, report immediately."

Chile, too, has announced plans to give "immunity passports" to recovered COVID-19 patients, allowing them to go back to work. Germany and the UK are also known to have considered a similar approach.

Implementation of such policies could eventually create a hierarchy of citizenship based on health and ability. It could increase the disadvantages of already marginalised communities, who have an increased prevalence for health problems due to their widespread lack of access to healthcare, sanitation and adequate nutrition. Moreover, these policies could be used to legitimise violence towards the sick, immunocompromised and elderly, as well as people with disabilities.

We need to ensure that this unprecedented public health emergency is not used to legitimise violence towards the most vulnerable members of our communities. As countries decide whether or not to lift restrictions and reopen economies, we need to challenge the use of methods that could pave the way for the rise of eugenic ideologies that determine a person's worth based on their ability to work and contribute to the economy.

The views expressed in this article are the author's own and do not necessarily reflect Al Jazeera's editorial stance.
ABOUT THE AUTHOR
Dhakshayini Sooriyakumaran 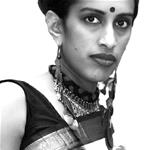 Russia's official coronavirus death toll has risen to 3,099 after officials said 127 people had died in the last 24 hours.

Russia's authorities reported 8,849 new cases of the coronavirus, raising the total number of cases to 317,554.

Singapore's health ministry has confirmed another 448 coronavirus cases, taking the city-state's tally of infections to 29,812.

UK healthcare workers will begin taking part in a University of Oxford-led international trial of two anti-malarial drugs to see if they can prevent COVID-19, including one US President Donald Trump says he has been taking.

The 'COPCOV' study will involve more than 40,000 frontline healthcare workers from Europe, Africa, Asia and South America to determine if chloroquine and hydroxychloroquine are effective in preventing the coronavirus.

The drugs have risen to prominence after Trump said earlier this week he was taking hydroxychloroquine as a preventive medicine against the virus despite medical warnings about its use.

In a bulletin, the ministry said total deaths because of the pandemic had increased to 846, while infections had risen to 13,434. But 68 more patients have recovered, bringing the total number of recoveries to 3,000.
Top

Over 95,000 confirmed COVID19 cases on the African continent - with more than 34,000 recoveries & 2,995 deaths. View country figures & more with the WHO African Region COVID-19 Dashboard: https://arcg.is/XvuSX 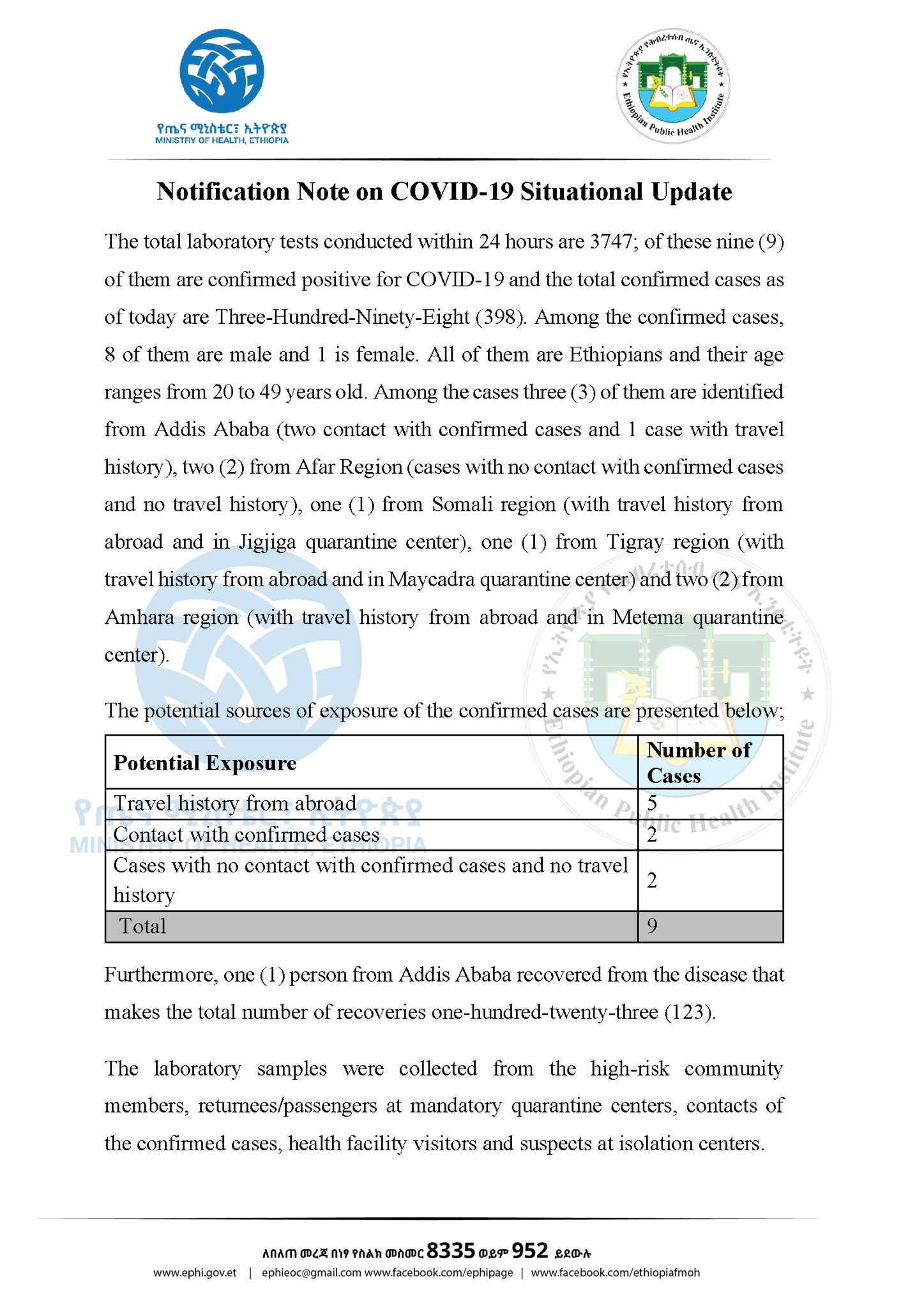 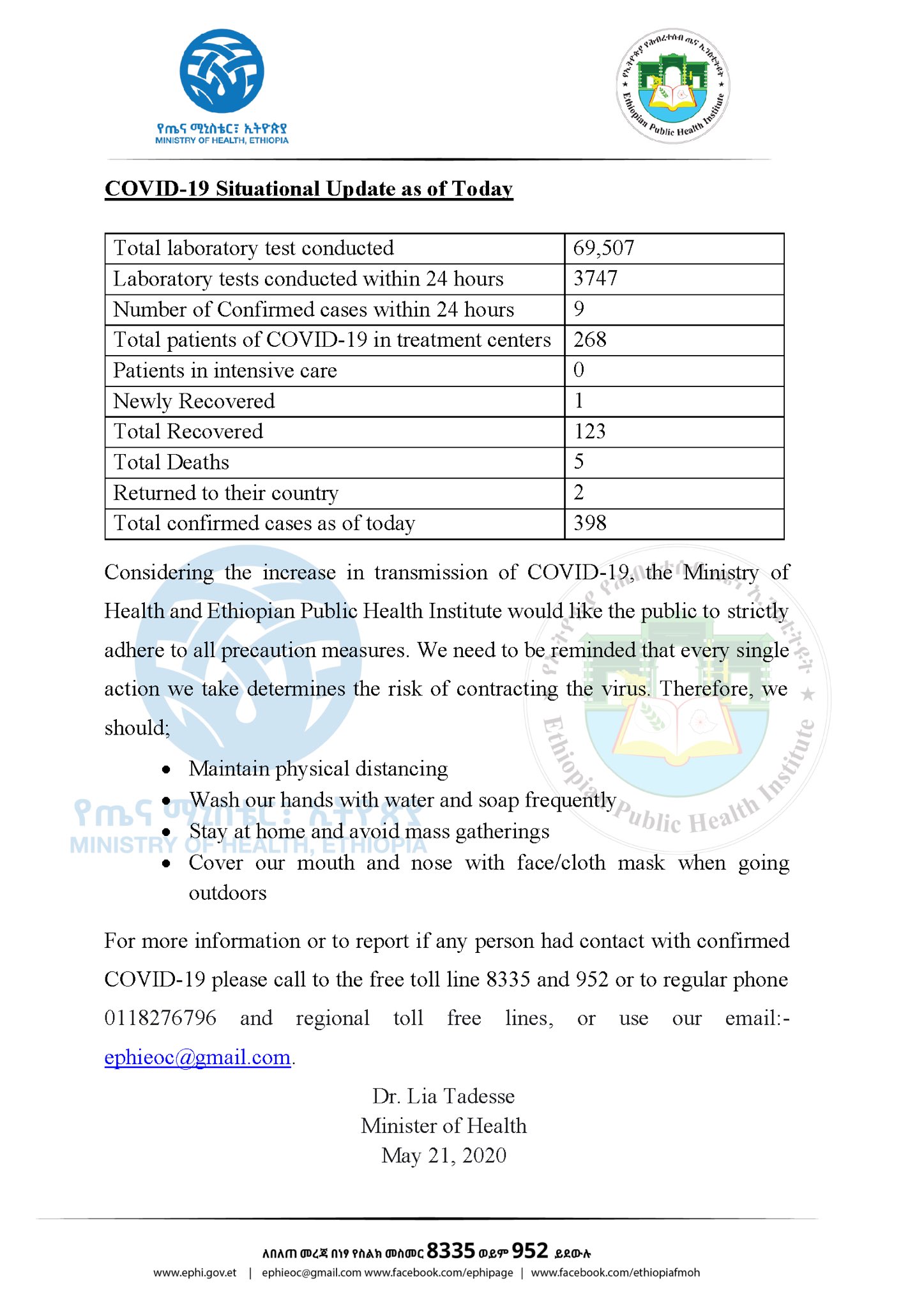 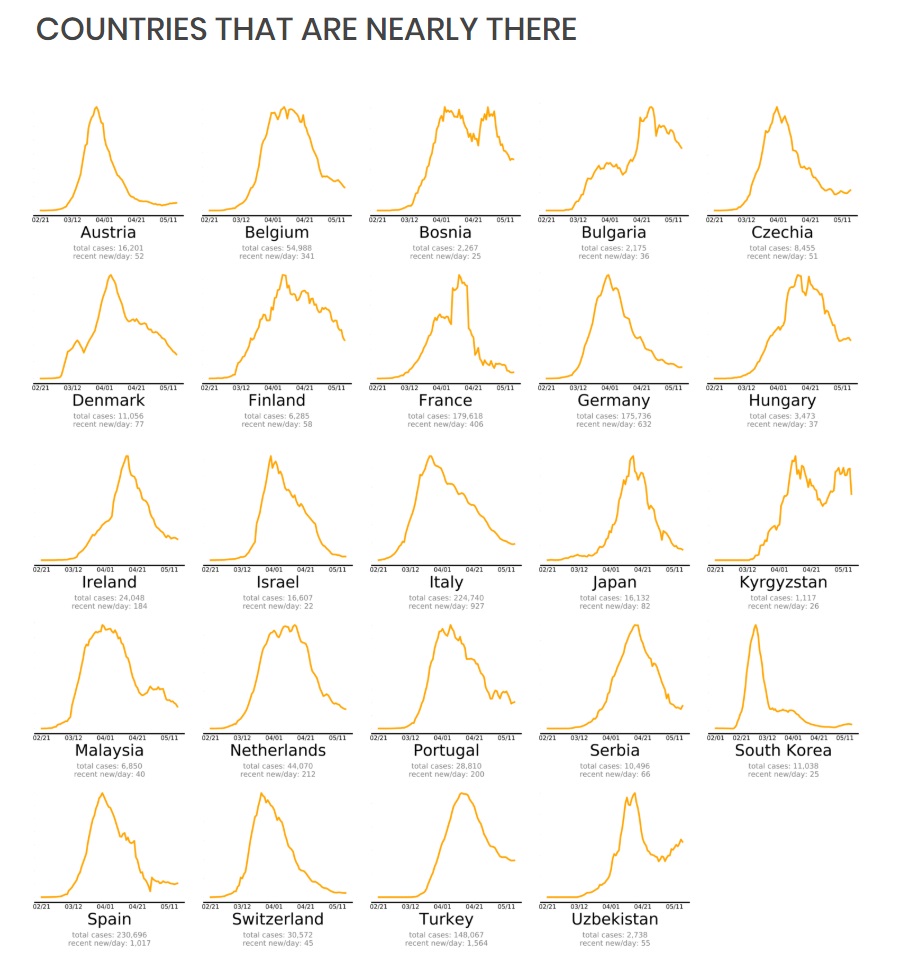 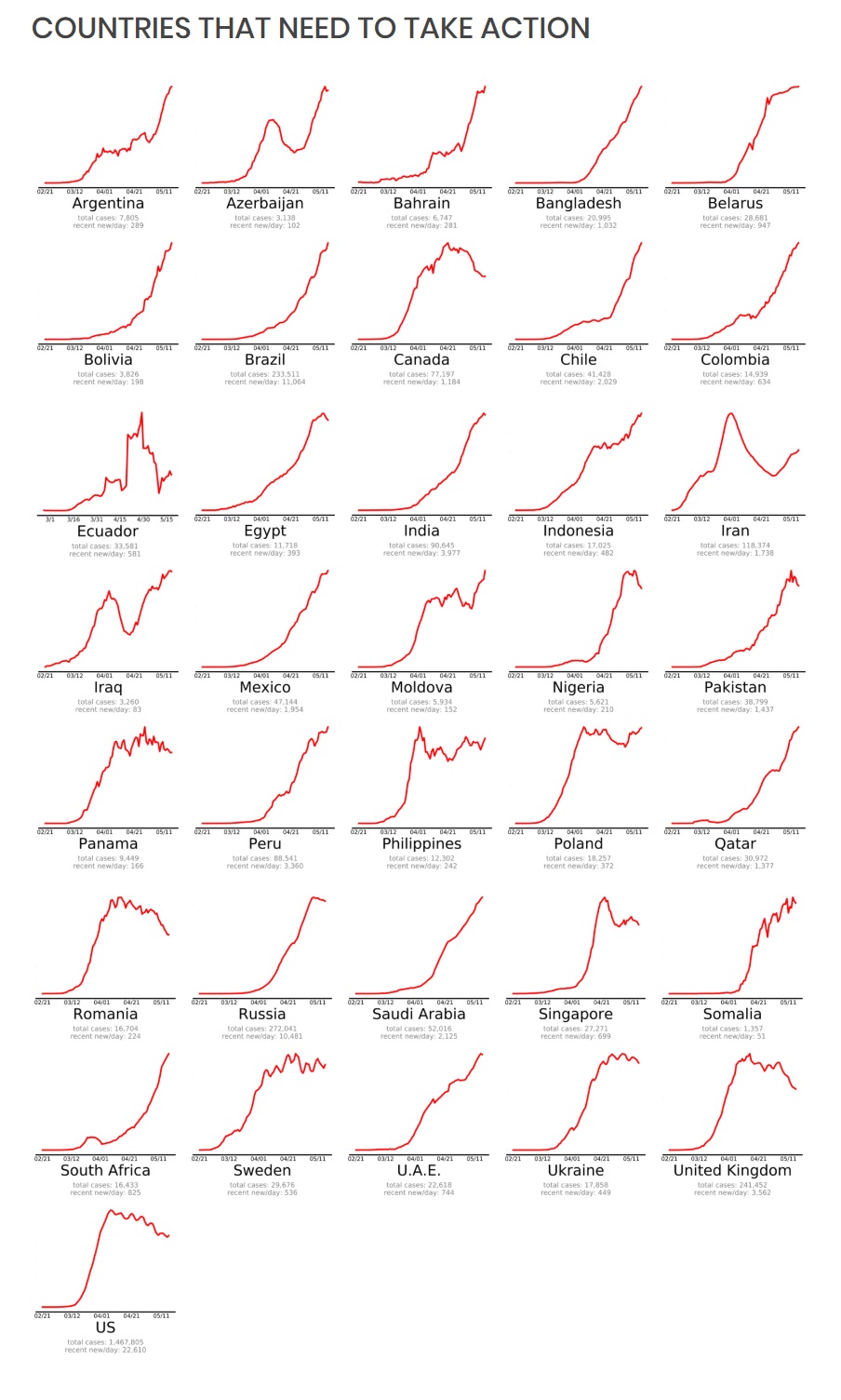 Is coronavirus really in decline in Tanzania?

Coronavirus: Is Tanzania's president right to say cases are falling?
President Magufuli has been criticised for his response to the virus, but are cases falling as he claims?

A church service in Tanzania - with no social distancing 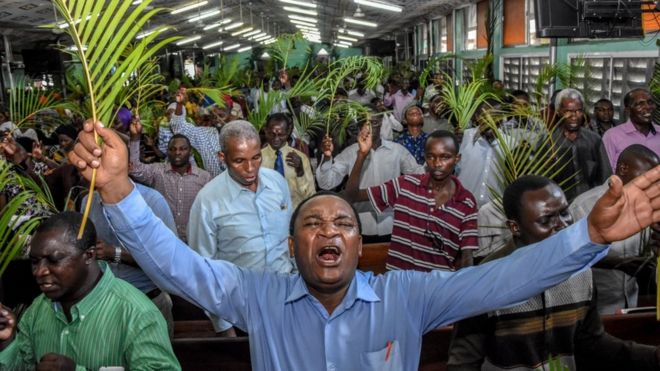 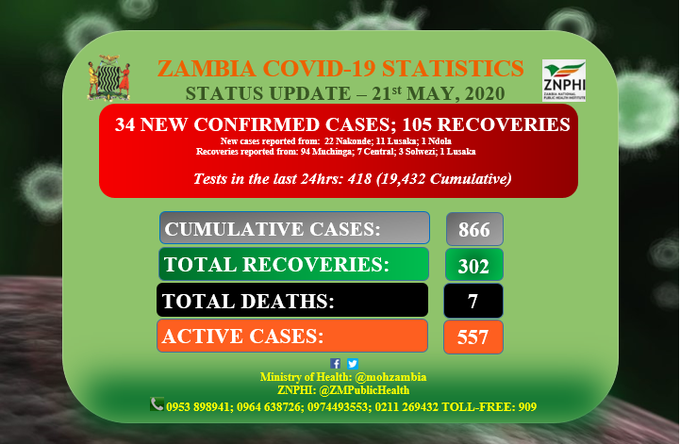 Namibia - 2 new cases of #covid19na after 46 days without any new cases. 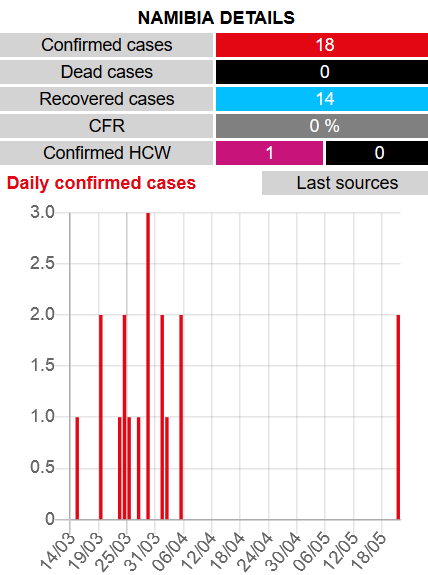 The country is an African example of controlling the pandemic.

The United States has lead the global effort to combat COVID-19, allocating more than $10 billion to benefit the international response – everything from vaccine research funding to preparedness efforts to humanitarian aid. - Secretary Pompeo

QuantLase Imaging Lab, the medical-research arm of the Abu Dhabi Stock Exchange-listed International Holdings Company (IHC), announced that it has developed novel equipment which enables for much faster mass screenings, with test results available in seconds and allowing testing on a wider scale. This break-through will enable ‘Mass-scale screening’, changing the whole dimension of tracing.

AbdulRahman bin Mohammed Al Owais, Minister of Health and Prevention, expressed hope over the discovery saying: “We are always following innovations related to the early and rapid detection of Covid–19. The government is keen on supporting initiatives that help the healthcare system in the UAE. Health officials have been closely monitoring the progress of trials with QuantLase in order to test this equipment. We are proud to see a technology that works and that will help to protect our people better.”

“The equipment, which uses a CMOS detector, will enable mass-scale screening with results made available in seconds,” said Dr Pramod Kumar, who leads the team of researchers at the lab which has been studying the change in cell structure of the virus-infected blood.

“In fact, our laser-based DPI [Diffractive Phase Interferometry] technique, based on optical-phase modulation, is able to give a signature of infection within a few seconds. What’s more, it is user-friendly, non-invasive and low-cost. We believe it will be a game-changer in tackling the spread of the coronavirus.”

Explaining the critical role of artificial intelligence (AI) in the diagnostic system, Dr Kumar said that an advanced AI image-analysis model predicts the outcome of each image with precision, speed and scale. This is especially critical in large-scale testing programs, where a massive number of images needs to be analysed with accuracy and efficiency. The lab is using G42, a leading AI and Cloud Computing company, to further enhance the laser program.
Top

Early Lockdown could save at Least 36,000 Lives in New York, Data show.

Even small differences in timing would have prevented the worst exponential growth, which by April had subsumed New York City, New Orleans and other major cities, researchers found.

Djibouti records 219 new COVID19 cases and one more Death in the last 24 Hrs ,bringing the country's total confirmed cases to 2047. The new cases were reported out of 1100 laboratory tests. Djibouti has conducted a total of 21,156 tests so far with 10 deaths & 1055 recoveries. 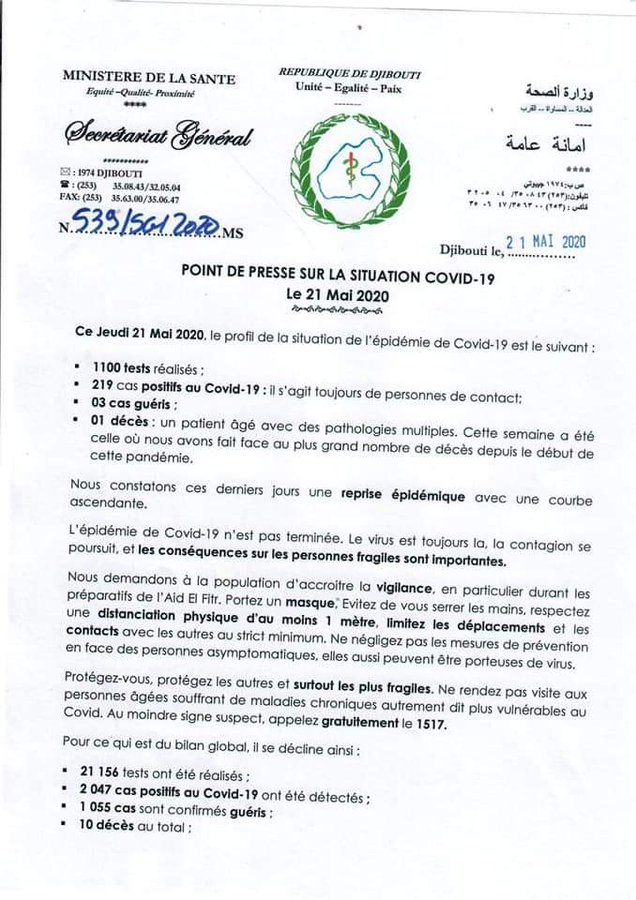 COVID-19 'Is an African Governance Crisis'

Analysis - In the wake of Covid-19, a governance crisis is emerging which could impact on the way that Africa is able to respond to the pandemic. 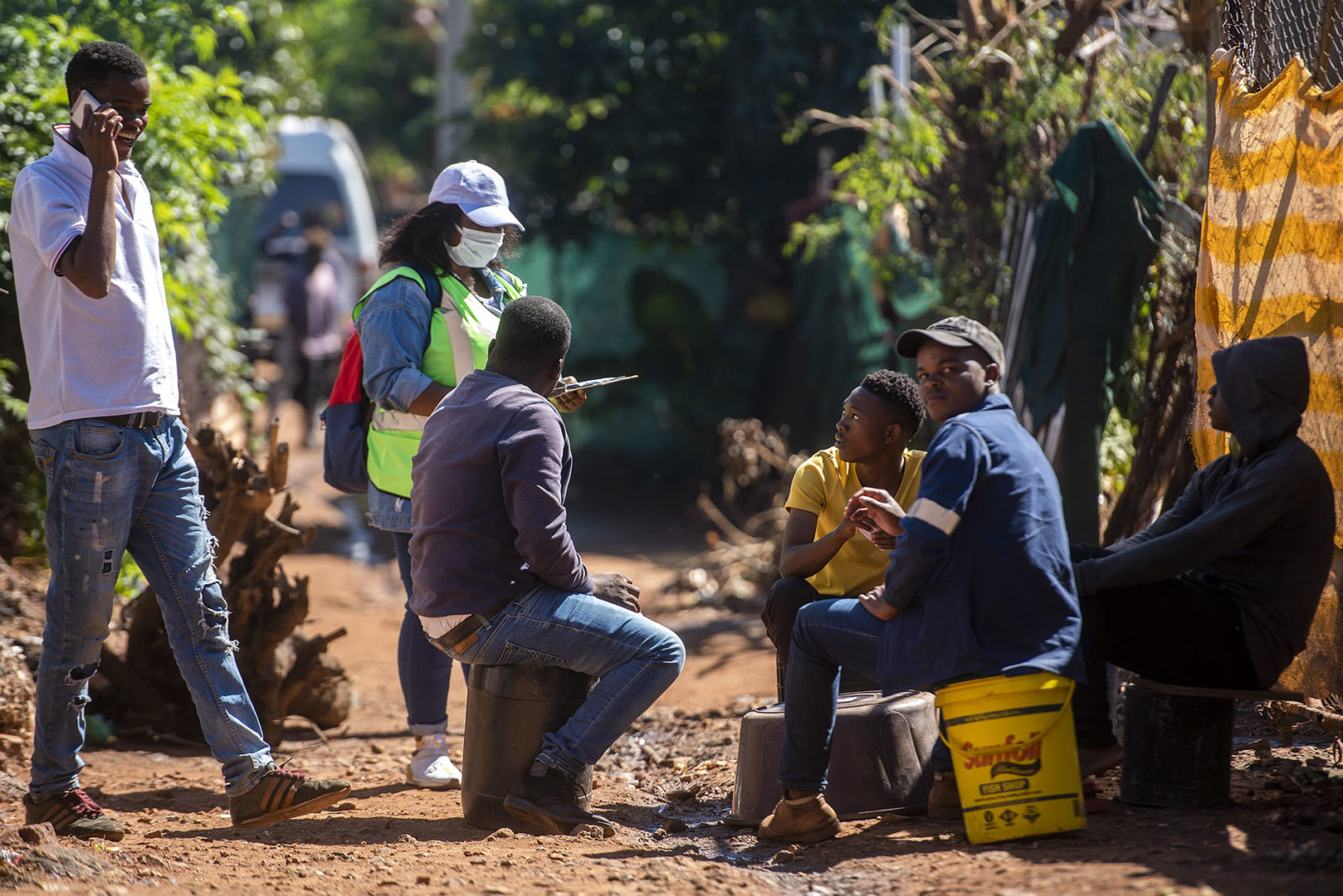