Open letter to Mr. Isaias Afwerki of Eritrea – Re: Coronavirus (COVID-19) in the Eritrean Penal System

Open letter to Mr. Isaias Afwerki of Eritrea – Re: Coronavirus (COVID-19) in the Eritrean Penal System

You may well have heard that Iran, suffering from a huge outbreak of coronavirus, has temporarily released 85,000 prisoners from its jails in order to cope effectively with the virus that has infected the country’s penal system, as well as the whole population.

As I am sure you must be aware, no country is going to be immune from this potentially deadly virus, and Eritrea will be no exception, as demonstrated already by reports of the first case of coronavirus in a traveller from Norway arriving in Eritrea confirmed on the 21st of this month. Since symptoms do not normally display until fourteen days after infection, it is highly likely that there are already many returning Eritreans who are unwittingly carriers of the disease.

The virus is at its most dangerous in confined spaces where there is sustained contact, not necessarily physical. It is airborne and can spread itself on many kinds of surfaces. High standards of hygiene are vital at this time. You must be conscious of the huge numbers of citizens held in your country’s extremely overcrowded prisons, and of the very unsatisfactory hygiene and health conditions within Eritrea’s penal system. Most of them are prisoners of conscience who have been detained without legal due process for years.

When, as it must, the virus reaches Eritrea’s prisons, it could be even more lethal than in Iran. If Iran has had to temporarily release this huge number of prisoners to ensure there are not huge mass fatalities in its penal system, it must be apparent to you that Eritrea will need to take the same steps.

On the grounds of sheer humanity and to avoid an enormous death toll from the prison population, we must urge you to start this release programme at once, before it is too late. Will you make the plans for prisoner release immediately? May we appeal to you to initiate the whole programme by closing the entire military camp at Sawa and all other military training camps, where young people will be particularly at risk? We also urge you to halt the ongoing rounding up of citizens from the streets their homes and public spaces for military training?

This is perhaps the most urgent and dangerous issue you are likely to deal with this year. Will you take the necessary humanitarian steps to protect Eritrea’s large prison population? And will you co-operate with the World Health Organization (WHO) in doing so? It is further requested that you initiate specific health care and life protection programmes for the elderly, the poor and people with disabilities, as well as war disabled veterans, to protect them from this hugely dangerous virus.

Loin and hyena had a dispute about two domestic animals they owned. It happen to be the hyena had a female cow and the loin had a male oxen. One day the female had a birth of calf, the loin saw that and he immediately run to the cow and took some of the blood and painted the oxen Azzz and told hyena my oxen gave birth. The hyena shocked and said no oxen does not give a birth, cow does and the calf is mine. Both Agreed to go to middle man to decide their fate and they chose a middle man all wild animals including Waag. Everyone of them testified as follows..... in the old time the cow used to give a brith but now days the oxen gives a birth due to the loin gives them a stern warning before they open their mouths. Tenqam Waag heard the story from other animals the loin was threaten them if they tell the truth and the always shitaram Waag thought about it and had the perfect strategy how he humiliate the powerful lion by telling the truth without the consequence.

So, the last animal to testify is waag and Waag new the date and he was ready and waiting them at a big rock and digging the rock when he saw them coming towards him. They arrived and asked him to testify, the waag ignored them and continue digging the rock against another roack. The loin was very mad and told waag, what the hell you do not responds us, the waag told them I am very busy. The loin told him what are you doing, the waag responded I am taking the skin cover of the rock or "Lihxi". the loin told rock does not have any cover skin or Lihxi, the waag responded by saying Oxen does not give a birth but cow does. The loin tried to catch him but the waag jump to the tree and could get him.

The loin though every trick in his menu how he can catch waag and told to all animals, I am sick and please come and visit me. The strategy is Waag will come to and he will catch him. All Animals came and visited him. The only one has not shown up is waag, the loin sent him a special urgent message to come and visit him. Shitaraw waag has his own strategy too because he knew what is going on and what waag did to the loin and Waag cut long stick and carried his stick with him to lion place. Waag asked him how are you feeling lion??? The loin responded by saying I have very strong fever and feel hot and come and touch my body. Shitaram waag pick his stick and extended the other end of the stick to touch the loin, the loin said come close feel how hot I am. Waag said I am feeling it from her let alone close to you, the loin tried to pull the stick towards him if he can touch the Waag but the waag dropped the stick and run away again.

So, you are expecting Issayas to release anyone due to anything to ask him???

Her evil wish upon Eritrea, will not happen. That infected person will heal, and that's it! I hope she gets infected, herself!

And what's up, with sending a copy to the genocidal agame Tedros? 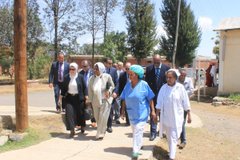 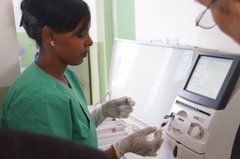 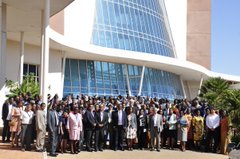 Our frontliners! Our heroes! Staff members of the Ministry of Health, Eritrea. Their wholeheartedness, diligence, purposefulness, and perseverance in these difficult times is second to none. Let their sacrifice be remembered, when the light of hope rises up!
(Simon K Hagos: @tewerwari_1) 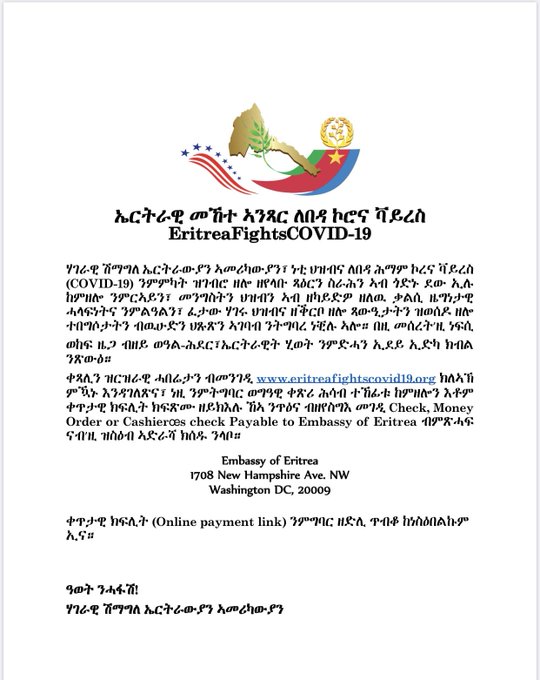 In response to the wide range of public calls to support the fight against COVID-19 in ERITREA, the National Council of Eritrean Americans (NCEA) is launching historic fundraising project under the theme #EritreaFightsCovid19

I hope Issayas received the open letter with the sense of humor but has big stick message.