"What are the political implications of the prosperity gospel?

Prosperity gospel culture is inherently anti-intellectual. This basic and obvious feature of the prosperity gospel has profound political implications. Let me unpack what I mean.

The foundation of prosperity culture is the unquestioning confession of what the leader declares. The promise is that when you confess what your leader declares, God will reward you with supernatural health, wealth, and victory. "Unity," "agreement," "order," and "alignment" are highly praised, and they all mean rallying around the leader's opinion.

The prosperity gospel follows a model of social order much like ancient sacral kingship in which the leader was seen as directly connected to God: God at the top, the leader under him, his inner circle under him, and everyone else underneath - looking up above them to reach God's blessing their through their leader. The leader becomes the high priest of access to what everyone wants: prosperity, which ultimately comes from God.

In this culture, then, asking questions is considered impolite at best and, more often, heretical and traitorous. Independent, rigorous thought is seen as faithless and dangerous. It is seen as disrupting and endangering the power of unanimous, uncomplicated confession. It is seen as a cancer in the social body that must be eliminated. An inscription from ancient Axum captures this perfectly: "Those who obeyed, he [the king] spared; those who resisted, he killed" (DAE Inscription

The irony is that prosperity leaders routinely use academic titles to enhance their prestige, while ignoring and attacking the value of academic practices like research, evidence, and critical thinking. More often, they simply belittle these "academic" practices by turning them into a joke.

For example, I once worked at a prosperity church where the founder was universally known as "Dr" (or "Daddy"). The fact that I had studied Greek and Hebrew - the original languages of the Bible - was not seen as a resource for the church and its teaching; instead, it was often an opportunity to poke fun at me and belittle me. When I finished my M.A. at the University of Chicago, the church leadership told me that I needed "spiritual rehabilitation" simply because I had done advanced studies at a "secular" university.

In reality, I was not willing to blindly follow their unreasonable, harmful dictations, and they took this as proof that I was spiritually damaged and dangerous. Why? Because spiritually healthy people unquestioningly obey; that's how the system works.

I have written before that prosperity gospel culture is inimical to the institutionalization of democracy. Democracy demands a plurality of perspectives rooted in asking questions, public debate, and peaceful argument. Democracy thrives where accountability and proof - not personality and obedience - thrive. The loyal critic, the faithful dissident, the committed questioner are the ideal citizens of democratic society. At its best, democracy is a political culture of permanent self-improvement through endless openness to examination, iteration, and innovation. James Baldwin captured the democratic spirit best: "I love America more than any other country in this world, and, exactly for this reason, I insist on the right to criticize her perpetually."

But these friends are enemies in the prosperity system. There is no "loyal critic" in prosperity culture because critique is automatically interpreted as disloyalty and betrayal.

It is fascinating that the prosperity gospel is spreading around the world in a time when populism and dictatorial leadership are also on the rise. Can the prosperity gospel - which requires unquestioning obedience and celebrates anti-intellectualism - make room for questions, accountability, and improvement through critique?

Time will tell. But for those who value democratic culture, the evidence is not encouraging.

"Enlightenment is humanity's emergence from its self-imposed immaturity. Immaturity is the inability to use one's own understanding without another's guidance. This nonage is self-imposed if its cause lies not in lack of understanding but in indecision and lack of courage to use one's own mind without another's guidance. Dare to know! (Sapere aude.) 'Have the courage to use your own understanding,' is therefore the motto of the enlightenment." Kant."

as usual you are comparing apples and oranges and purposefully trying to mislead the readers. this shows only how desperate the anti-abiy camp have become and doesn't seem to have a means to win fair and square. we ain't low iq woyane dedebit graduates like you. we use our brains

watch how abiy criticizes and preaches against prosperity gospel as something that is only after earthly materials and not after heavenly God. if you think abiy is a property gospel preacher then good luck

btw, this is 7 years ago at addis ababa stadium.

Remember that everyone of the alien ideologies that the super arrogant despots of Ethiopia imposed on the unsuspecting people of Ethiopia ended in utter disaster. All of them led to terrible massacres & wars. The prosperity gospel that pastor Abiy hopes to impose on Ethiopians by stealth is also going to end in tragedy & bloodshed. If you can bet on one thing very typical of Ethiopian & African despots is that they never learn from past mistakes & tend to repeat them .. again .. and again .. and again? .. Why, among other reasons, because they are ጦጣዎች

1) - logo of the prosperity [christian] gospel [remember that 50%+ Ethiopians are muslims] ...

2) - logo of Abiy-the-pentecostal-fanatic's prosperity party ... see any resemblances ... may be the similarities are just mere coincidences 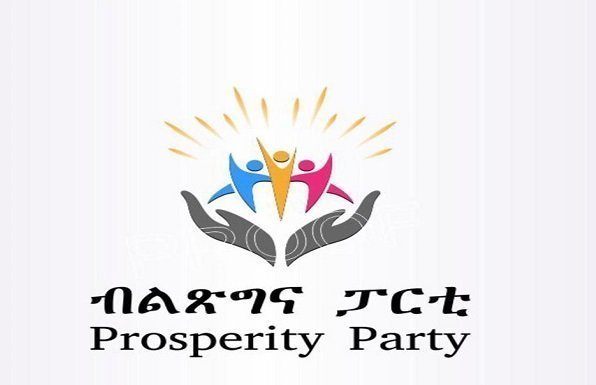 Yabllo the Arab poppy-- If one considers your tribal politics, prosperity fundamental beliefs are lightyears ahead, in its humanistic convictions, in its harmonizing underpinning. Your chosen buddies bekele gerba and ayatola jawara are the product of intellectual landfills who going to bring about suffering and misery to the very people they are supposedly advocating. Having said that though Abiy, needs to stay clear of bashing intellectuals, all dictators have attacked intellectuals because they are the first to point out the inconsistencies of politicians early on than the layman. Meles and Mengsut had attacked intellectuals and we know what the net result had been.
Top

TGAA wrote: ↑
15 Mar 2020, 12:37
Yabllo the Arab poppy-- If one considers your tribal politics, prosperity fundamental beliefs are lightyears ahead, in its humanistic convictions, in its harmonizing underpinning. Your chosen buddies bekele gerba and ayatola jawara are the product of intellectual landfills who going to bring about suffering and misery to the very people they are supposedly advocating. Having said that though Abiy, needs to stay clear of bashing intellectuals, all dictators have attacked intellectuals because they are the first to point out the inconsistencies of politicians early on than the layman. Meles and Mengsut had attacked intellectuals and we know what the net result had been.

From: Oromoo Scholars and Professionals USA, Canada, Europe and Australia Contact email: [email protected] February 28, 2020 Mr. Isayas Afewerki President of Eritrea Your Excellency, We, the undersigned Oromo scholars and professionals, write this letter to you to express our disappointment in your

Open Letter to Ethiopians and to the International Community RE: Communique of “Concerned Ethiopians

And the following list of over 145 or so "intelectualls"

Concerned Ethiopians Across the Globe Communique Urging Prevention of Genocide and Balkanization of Ethiopia, most probably ragtags of old systems.

I have said before and may repeat it here: every privilege comes with an attached responsibility, if one fails to realize that, then that body should blame itself first and foremost if the privilege may have to be denied.

If everybody starts to go out and attempt to shop a PhD title and then comes back and demands he/she deserved a position in the government, then the government has the responsibility to ask back but you need to qualify yourself first, in my view.
Top

If you're expecting politsian going to be consistent than so called intellectuals ...well I say keep your fingers. T
Real intellectual loyalty is for truth not for their bellies or tribal blood so when you see one of those it hard not to recognize them. The other political trick we play on each other is lumping all in one to push our political agenda. Each piece of intellectual product should be judged by it's content. However,as they say garbage in garbage out. What Issayas has put forward is the true not 50 even ..1000 of these hullabaloos can not move it an inch.
Top
Post Reply
7 posts • Page 1 of 1