Any Tigrigna speaker is not Agaazian then he must be Dembian or Sudan origin???

Re: Any Tigrigna speaker is not Agaazian then he must be Dembian or Sudan origin??? 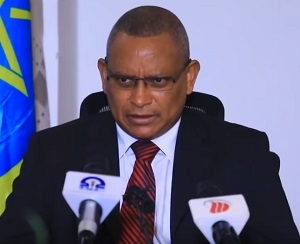 Debretsion-Badme-EritreaFebruary 13, 2020 (Ezega.com) -- The Chair of the Tigray People Liberation Front (TPLF) Dr. Deberetsion Geberemichael said his administration is ready to resolve the border dispute with neighboring Eritrea based on international laws and relevant provisions.

Briefing journalists in connection with the 45th founding anniversary of TPLF, Debretsion stressed the need for leaders of Tigray, Ethiopia, and Eritrea to come to a negotiating table to resolve the border issue and work for ensure real peace among their peoples.

Debretsion who is also Deputy President of the Tigray state accused Addis Ababa of disrupting the peace process and failing to facilitate conditions to resolve Ethio-Eritrea border disputes.

Debretsion did not comment on if his government is willing to give away Badme town and surrounding areas to Eritrea as per the decision of the Ethio-Eritrea boundary commission back in 2000.

“The situations in the disputed Badme town and surrounding areas became worse particularly after the diplomatic relations between Ethiopia and Eritrea were restored in mid-2018,” said the Eritrean President in an interview broadcast on Eritrea TV.

According to the TPLF leader, the regional government wants the border issue to get a lasting solution but no effort was made to start negotiations on the border and other unsettled issues.

Before Ethiopia announced its acceptance of the decision by the border commission, commonly known as the Algiers Agreement, it raised questions regarding the interpretation of the agreement and pointed out challenges that would confront its actual implementation on the ground.

It is not known if TPLF will raise the same concerns now. The Algiers Agreement was widely condemned in Tigray when it was announced. Many felt betrayed for not being represented well during the arbitration process. The TPLF backed away, in part, due to the massive backlash it faced in the state at that time.

Some now question whether both the central government and the regional government are on a strong negotiating ground. The central government has many issues on its plate. The TPLF is currently in the middle of its toughest period since its creation, one that threatens its very survival. The Badme issue may look small in comparison to these leaders, according to critics.

Despite repeated effort by the TPLF to reconcile, the Eritrean leader has been very critical and dismissal of the TPLF, especially since Prime Minister Abiy Ahmed came to power. On many occasions, he did not hide his wish to see the TPLF defunct. Last week, he accused the TPLF of being the source of the ethnic conflicts Ethiopia is facing today.

Speaking about existing situations in the country, Debretsion said the economic situation of Ethiopia is going down the drain and, if unchecked, it will pose a serious problem on the livelihood of its people. In a recent discussion with MPs, Prime Minister Abiy Ahmed said Ethiopia’s economy has gained momentum and created over 1.2 million new jobs since he took office in April 2018.

Debretsion said the forthcoming elections are a crucial step to resolve the existing political crisis and determine the fate of the nation.

Earlier in January 2020, the TPLF chair, Dr. Debretsion Gebremichael had said those who are not in line with TPLF decisions will be considered as traitors and will be dealt with accordingly. He said, "you are either with us or against us." "Our campaign will start against them, the traitors," he added at that time.