The Eritrean National Charter of 1994.

The EPLF held its 3rd Congress from 10 to 16 Feb 1994, in Nakfa. After liberating Eritrea from Ethiopian colonization & occupation, the EPLF transformed into a new post-war political movement, the People’s Front for Democracy & Justice- The PFDJ- & adopted a National Charter.

Scanning the countryside from 30,000 feet

Scanning the countryside from 30,000 feet on the flight from Addis Ababa to Asmara toward the end of the growing season, I was struck by the progressive shift from a green landscape to a paler shade of green, and finally yellow as we came in to land. Eritrea’s agro-ecologies are quite varied, like most African countries’, but rainfall is limited in all of them, and droughts are common. Total rainfall amounts are likewise varied, from season to season. This is an agricultural system that calls for early-maturing varieties, and the best that stress-tolerance breeding can offer.

In terms of total harvest, Eritrea’s leading food crop is sorghum, but, in keeping with the diversity theme, we saw very little sorghum in and around Asmara. It turns out that sorghum is mainly cultivated in the country’s southern regions bordering Ethiopia. Next in order to importance on a national level is barley, followed by wheat, millet, and maize. Lentils are the countr’s most important legume crop. Sesame is also an important crop in some parts of the country.

SSG was very warmly received by the Government of Eritrea. This was evident from the beginning: on our first full day in the country, we were invited by the Minister of Agriculture, Mr. Arefaine Berhe, to participate in the country’s World Food Day ceremonies, followed by a wonderful meal of local Eritrean dishes. All of the dishes (including a sort of casserole made from oats and vegetables) were delicious, but I was most impressed by the barley bread, which is very hearty, and can be stored for long periods. We also enjoyed locally-made Mozarella cheese and sorghum injera.

Over the course of our week in Asmara we met with all the heads of departments of the Ministry of Agriculture, including the seed regulatory body, the director of planning (Mr. Bereket Tsehaye, our host for the mission), the director of the Agricultural Research Institute (in Halhale, some 40 km from Asmara), and extension. We also met formally with the Minister, who expressed a great desire to collaborate with Seed Systems Group.

The Minister and all the directors of the Ministry understand the importance of improved seed, and seed production and distribution is one of the main activities of the Ministry, led by the Extension Department. The main priorities for seed supply, at present, are hybrid maize seed production (currently small quantities are imported from India), new, higery-yielding varieties of sorghum, and improved varieties of pearl millet resistant to downy mildew. The good news is that recently-developed varieties of all of these crops, and more, are available from CGIAR breeding initiatives. We will do our best to respond! 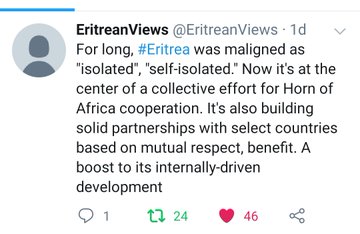 From 1998 - 2018, all kinds of wars—overt & covert, psychological & diplomatic, sanctions & strategic depopulation, etc—were waged against Eritrea to isolate & destroy it. In the end, resisting the fiercely imperialist machinations against it, resilient Eritrea emerged victorious.
Top