Tigray and Amhara do not like each other because of one of them always has dominnated Ethiopian politics. There has been power struggle, which sometimes ended in favour of the Amhara and other times in favour of Tigrayans (includes Seraye, Akule Guzay and Hammassen).

Every community who uses Geez or has used Geez is agazian be definition. It is not only TigrayTigrign but also Gondar, Gojam, Wollo, Shewa.

Tigrigna is a language and culture while Tigray is a specific geographic area. Don't mix everything with everything.
Top

I remember the old days of "don't listen to your mind, listen to mine."
Top

Tigray and Amhara do not like each other because of one of them always has dominnated Ethiopian politics. There has been power struggle, which sometimes ended in favour of the Amhara and other times in favour of Tigrayans (includes Seraye, Akule Guzay and Hammassen).

Every community who uses Geez or has used Geez is agazian be definition. It is not only TigrayTigrign but also Gondar, Gojam, Wollo, Shewa.

But Amahric and Tigray languges( or any other languge for that matter) didn't decend from Ge'ez. Your claim is based on an old belive that is, well, old!

Let me make it simple for you, Ge'ez is not the common ancestor for all Ethio semetic languges. It doesn't even have any dialect and most of all, it's dead, together with its original tribe who spoke it. Those original Ge'ez speaking Axumite didn't had any descendent, all of them were either killed or assimilated. So claiming to be because your church kept it from being completely extinct is like me, an Ethiopian black person, claiming to be a direct descendant of the Romans because I joined a Catholic Church or school who uses Latin.
Top

@Rtt,
Are you serious?? Make some reading about semetic languages, you will find out Tigrigna and Amharic are developed from Geez. Geez is pervasive in all semetic langages: arabic, hebrew, armiac. Tigrigna is okder than Amharic as it is similar to Armaic, an old syrian semetic language, with which The Holy Bible was written.

Please read the following to start with:

The Semitic languages, previously also named Syro-Arabian languages, are a branch of the Afroasiatic language family originating in the Middle East that are spoken by more than 330 million people across much of Western Asia, North Africa and the Horn of Africa, as well as in often large immigrant and expatriate communities in North America, Europe and Australasia. The terminology was first used in the 1780s by members of the Göttingen School of History, who derived the name from Shem, one of the three sons of Noah in the Book of Genesis.

The Semitic languages are notable for their nonconcatenative morphology. That is, word roots are not themselves syllables or words, but instead are isolated sets of consonants (usually three, making a so-called triliteral root). Words are composed out of roots not so much by adding prefixes or suffixes, but rather by filling in the vowels between the root consonants (although prefixes and suffixes are often added as well). For example, in Arabic, the root meaning "write" has the form k-t-b. From this root, words are formed by filling in the vowels and sometimes adding additional consonants, e.g. كتاب kitāb "book", كتب kutub "books", كاتب kātib "writer", كتّاب kuttāb "writers", كتب kataba "he wrote", يكتب yaktubu "he writes", etc.
Top

The following map illustrates the spread of semitic languages 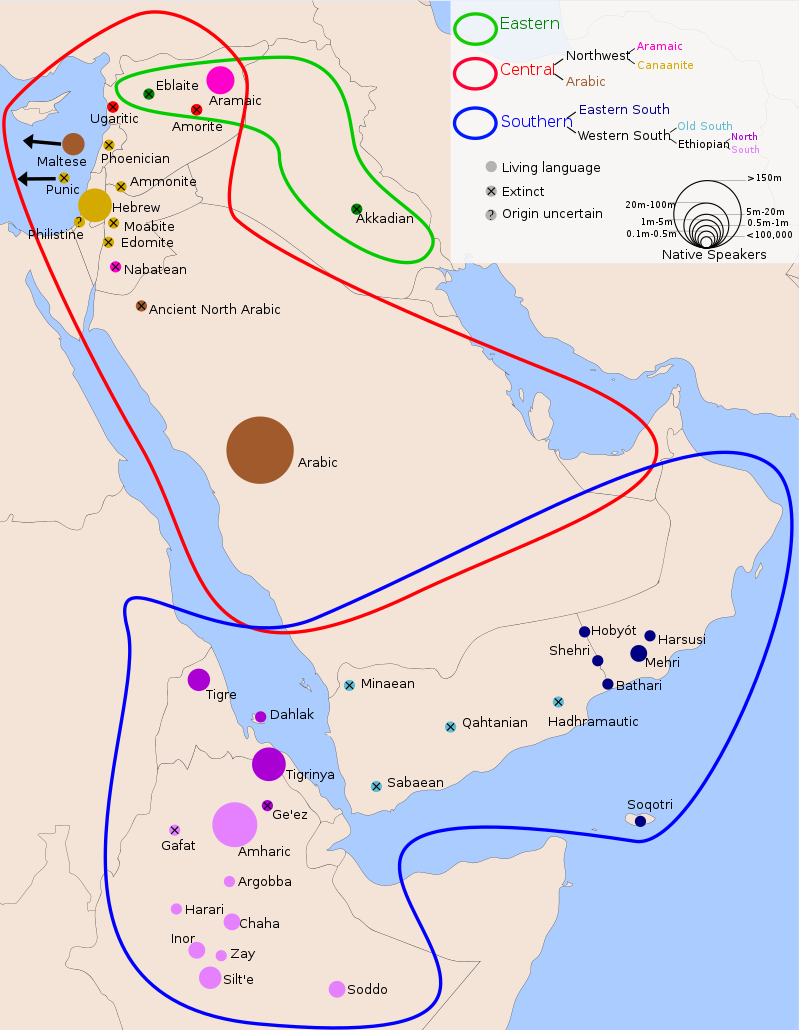 Geez is still used by The Ethiopian Orthodox Church. It is thus not extinct. It might be necessary for Ethiopians to revive Geez by introducing it as an option in high schools. There are undergraduate Geez progemmes at the universitis of Gondar and Mekelle.
Top

The word "Hzib" itself is plural. How would you make a double plural?
This is just a TPLF made up word with no meaning!!!!
Top

That's exactly right. The 60s thugs are making up things to confuse us.
TPLF used it for its evil deeds. The term, Hizboch, is used to show that we are different.
Top


I never said that seb and sew had anything to do with hameru ha. I mentioned hameru ha to point out how Hizb is pronounced on one side in Amharic and on the other side in both Tigrigna and Arabic. There are some Arabic words like Hizb,MusHaf and Birhan that the Arabs borrowed from us. That is how Arabic is related to our languages. Once again my focus was on Hizb not on seb and sew.

There is no disagreement between you and me. I supported your view that Hizb means among others a group of people and then I went further to add my contribution by stating that modern Arabs today use Hizb to mean party ( political ) which is related to the definition that you gave.
Top

Rtt,
The information you have brought is made by Amhara intelectuals and is false as this does not explain the similarity between Tigrigna and Armaic. We believ Armaic is the origin for all semitic languages. Geez, Amharic, Tigrigna and Guraghe languages are semitic. Tigrigna and Guraghe speakers are related to Middle Eastern people. Most Amhara do also. This is genetically proven and our culure (Semitc Ethiopian ) is ralted with Asians.We are asians and blacks- a mixture.
Most family names of Pakistan, Afgahnistan and Bangladesh are related to Tigrigna and Geez. So do most Arabic and yemen names. We should not be ashamed of our semitic roots.
Top

Dear Naga Tuma: Very good questions, but why did you ask: what motivated you to ask these questions?

It would have been better if we knew what confusions you encountered about these terms. Terms like , ግዕዝ, ኣግዓዚ, እግዚኣብሔር እግዚእ, እግዚኦ, and ብሔር, have been in use for centuries. However, I find--in my readings-- ህብረብሄር or ኅብረ-ብሔር a relatively recently (a few years or decades) coined term; and has appeared in frequent use probably in the last 40 years; and more so since EPRDF started discussing "the need" of uniting its coalition members into one united party. I find it confusing more now, when different people seem to mean different things by the same term. I also want you to take note that such longstanding words/terms could change their conceptualization/meaning over time. One word could also have several meanings, and different persons could get into arguments (and often confuse others) on the definition of certain term/word. Regardless, though, this is a good opportunity to clarify what ህብረብሄር or ኅብረ-ብሔር means to whom, and when.

Let us try to bring our knowledge of these terms to the same level. For that reason, I directed my efforts towards what authoritative people (persons who studied them better than the average person) have written about some or all of these words/terms. I researched various sources of information---primarily dictionaries---and I will share my findings here. After that, I shall endeavor into getting samples of how different persons utilize ህብረብሄር or ኅብረ-ብሔር in their writings, and in what sense. Bear with me, please. I will present here a few things at a time, without much opinions:

I think the word peoples is as such grammatically not incorrect.

A set is a collection of elements, as such it is a plural in meaning (more than 1). Of course there is also an empty set and a set of just 1 element.

Well, both English and Amharic are my second and third lanuages respectively, still it seems to me that there is some confusion here.

Dear All: Additional information on the Ge'ez/Ge'iz words/terms

እግዚአብሔር = the lord of the world and regions;

Dear Naga Tuma: The last batch of Ge'ez/Ge'iz (and other related languages') terms related to your question(s)