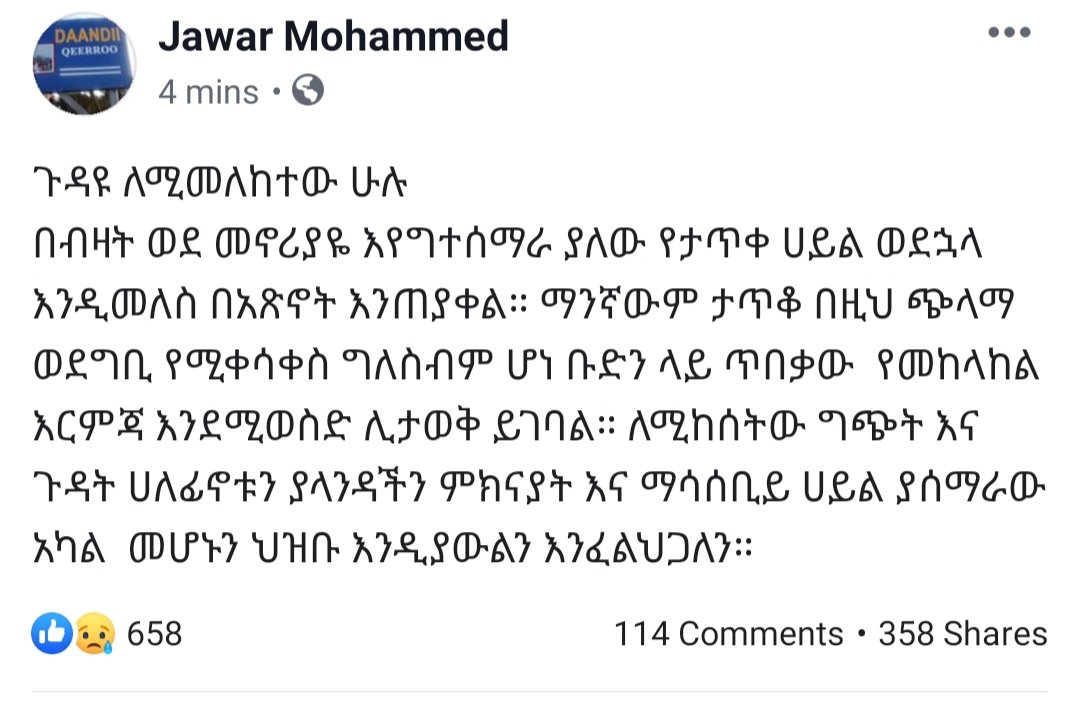 67 Killed in Ethiopia Unrest, but Nobel-Winning Prime Minister Is Quiet
Prime Minister Abiy Ahmed, this year’s winner of the Nobel Peace Prize, was in Russia when the protests broke out and has yet to publicly comment on the violence.

Mr. Abiy remained at a summit meeting of African leaders in the Black Sea resort town of Sochi, Russia when thousands of people took to the streets of the Ethiopian capital and several regional towns on Wednesday.

The protests were spurred by a prominent critic of the prime minister who had accused the police of plotting an attack on him. The critic, Jawar Mohammed, is the founder of an independent media network, and claimed that there was a plan to arrest or possibly kill him at his house in the capital, Addis Ababa.

The accusations stoked longstanding tensions in Ethiopia, the second-most populous nation in Africa, and drove hundreds of Mr. Jawar’s ethnic Oromo supporters to gather outside his home.

Thirteen of those who died in the protests were killed by security forces and the remainder died in sporadic fighting that broke out between rival groups, said Kefyalew Tefera, the regional police commissioner for the Oromia region. He said that another 213 were injured. He did not say what the root cause of that fighting was or what groups were involved.

By Thursday night, Commissioner Kefyalew said, calm had been restored to the country, with “no kind of protest or violent activities.” Officials also announced on Friday that they had deployed soldiers to seven regional towns, including six in the Oromia region, after violence broke out this week.

“This will bring about stability in the areas in cooperation with the regional security forces,” Maj. Gen. Mohammed Tesemma of the Ethiopian Army said at a news conference.

Since coming to power, Mr. Abiy has released tens of thousands of political prisoners and been credited with ending the decades-long conflict between Ethiopia and Eritrea, its isolated neighbor. The Nobel Committee that awarded Mr. Abiy the Peace Prize on Oct. 11 cited the accomplishments of his first 100 days, including lifting a state of emergency, granting amnesty to thousands of political prisoners, halting media censorship and legalizing outlawed opposition groups.

But during his time in office, domestic tensions have festered between ethnic groups that feel emboldened by a renewed sense of political freedom.

Mr. Abiy’s failure to return to Ethiopia when the protests broke out, or to say anything to try to calm the tensions, has disappointed some Ethiopians.

“The fact he was in Russia, doing nothing to take measures, that is raising some eyebrows,” said Zemelak Aytenew, an associate professor in government studies at Addis Ababa University. “He’s supposed to be a prime minister. In other countries when these crises happen people abandon their invitations and take charge of the situation.”

“Like many people I feel ashamed he has not done more than he did in terms of taking charge of the situation,” Mr. Zemelak said.

Mr. Jawar, the Ethiopian media owner and activist, has sometimes been an ally, and sometimes a rival of Mr. Abiy. Earlier this week, before the protests erupted, Prime Minister Abiy warned Parliament that unidentified media owners were fomenting ethnic unrest.

Analysts say that Mr. Jawar, who is 33 and has American citizenship, could mount a convincing campaign to succeed Mr. Abiy in next year’s general election. Mr. Jawar fueled the protests that helped bring Mr. Abiy to power in 2018, after Prime Minister Hailemariam Desalegn was ousted.

Mr. Jawar called for calm on Thursday, from his home, telling his supporters: “Open the blocked roads, clear the towns of barricades, treat those who have been injured during the protests and reconcile with those you have quarreled with.”

Mr. Abiy now finds himself in the tricky position of having to quiet Mr. Jawar’s supporters while living up to his new acclaim as a global peacemaker.

Mr. Jawar, who founded the independent Oromia Media Network, enjoys an extensive social media reach in Ethiopia — he has 1.75 million Facebook followers — giving him considerable ability to mobilize demonstrations, especially in the urban areas where he is popular with internet users.

“He does have the network to launch a party,” said Mr. Zemelak, of Addis Ababa University, though he said it was unclear how popular Mr. Jawar is in poorer and more rural areas of the country.
Top

i have said it before and i will say it again. The Amhara people should unite and destroye its enemies. another Misery is in the making.
your enemies are cooking for your demise.
Top