Joint report by @UNHumanRights & @EthioHRC will be issued, on Nov 1st. Many Ethiopians may view Daniel Bekele, as professional & impartial. But his enmity & hostility toward Eritrea, spans over a decade.

So, his report on Eritrea was written on day 1 of the joint “investigation”. The US/EU will undoubtedly try to use this report, for some ill-advised action! One of the primary western agendas is to weaken or stop altogether, Eritrea & Ethiopia cooperation & friendship

The report will defame Eritrea, to serve this agenda.

On Daniel Bekele & Eritrea:
Amnesty tried a regime change in Eritrea late 2011, with help from HRW. Daniel was head of HRW’s Africa Division, 2011-2016. He also served as senior advisor at Amnesty, but can't find a timeline on it.

Daniel Bekele authored a 2013 HRW report on Eritrea’s mining industry in service of Susan Rice’s agenda, to literally starve Eritrea. US tried to kill the mining industry using HRW, when its UNSC plans were thwarted!

In 2021 Daniel, unsurprisingly, wasted no time to rubberstamp HRW & Amnesty’s deeply flawed reports on fake Axum massacre. He tried to lend credibility to their report without doing an investigation, proving that his hatred for Eritrea still runs deep.

Daniel has admitted, that EHRC lacks professional staff & that it is mostly foreign funded. After meeting with Denmark & Germany ambassadors two months ago, Germany last week awarded him a medal of honor. So, what effect do donors have on EHRC? Why do donors focus on EHRC? 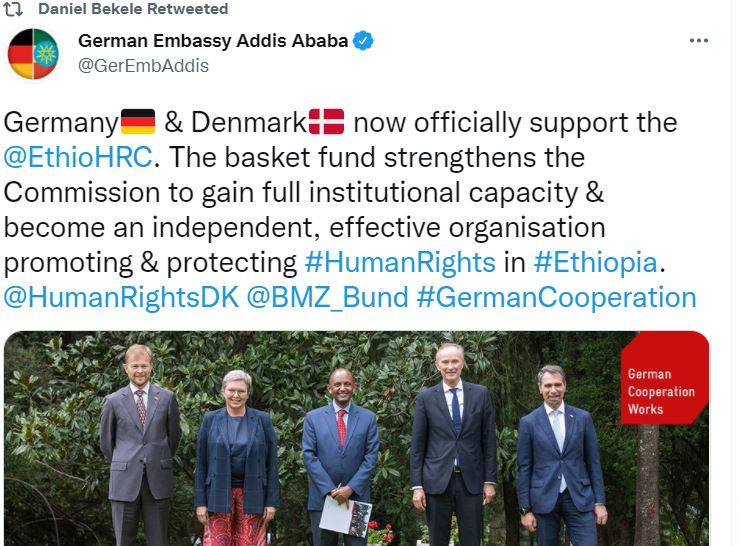 With @mbachelet of @UNHumanRights, I will let a picture tell the story. Her partiality towards Eritrea, needs no elaboration. 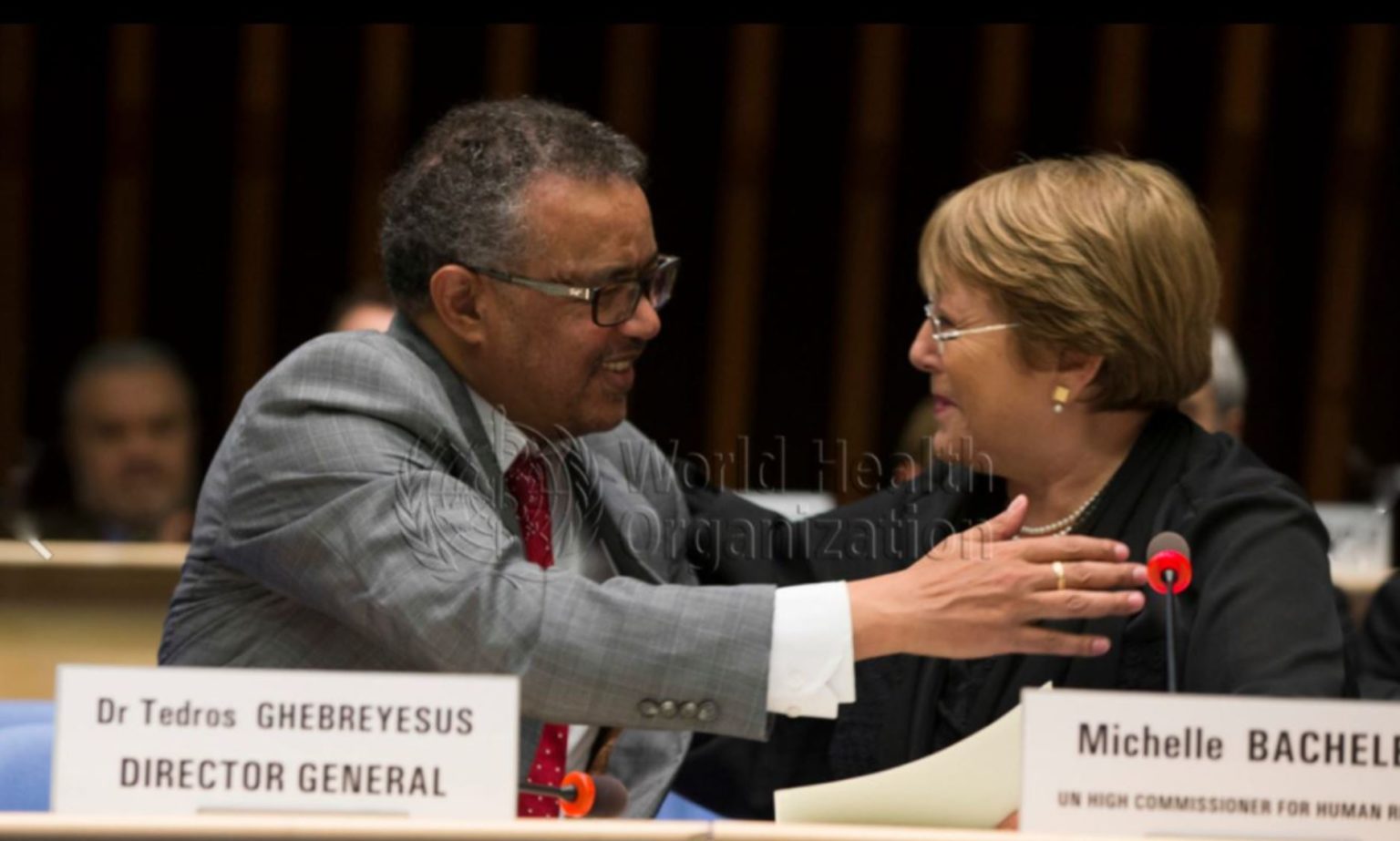 Questions for @DanielBekele @EthioHRC:
(1) EHRC’s report on its adventure to Amhara & Afar, once referred to TPLF as TDF. What's the motivation for this? Does that respect, Ethiopia's sovereignty?

2) will UN/EHRC’s staff be capable of identifying, coached/tampered witnesses? The level of witness tampering in Tigray region is huge, so how will the report account for that? Eritreans are certainly skeptical of EHRC’s capability, with Daniel at the helm.

Here below is, for instance, one Tigrayan advising people to exaggerate their lies.

3) With TPLF wearing ENDF & EDF uniforms to commit heinous crimes, how can UN/EHRC verify the true identity of the perpetrators?
4) what's the level of involvement by Aaron Maasho, consultant & spokesperson of EHRC, in the investigation? Isn't he, a TPLF? 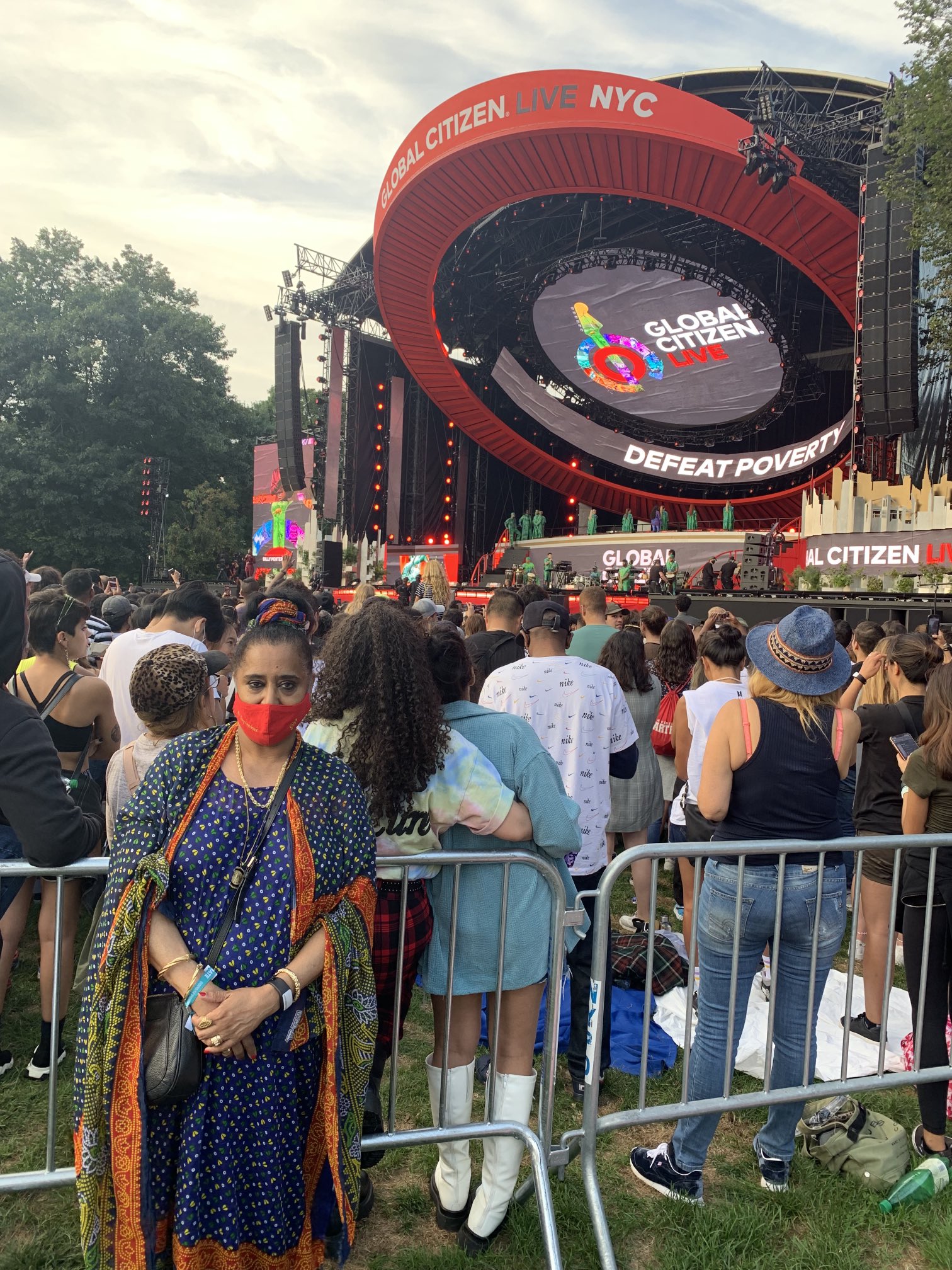 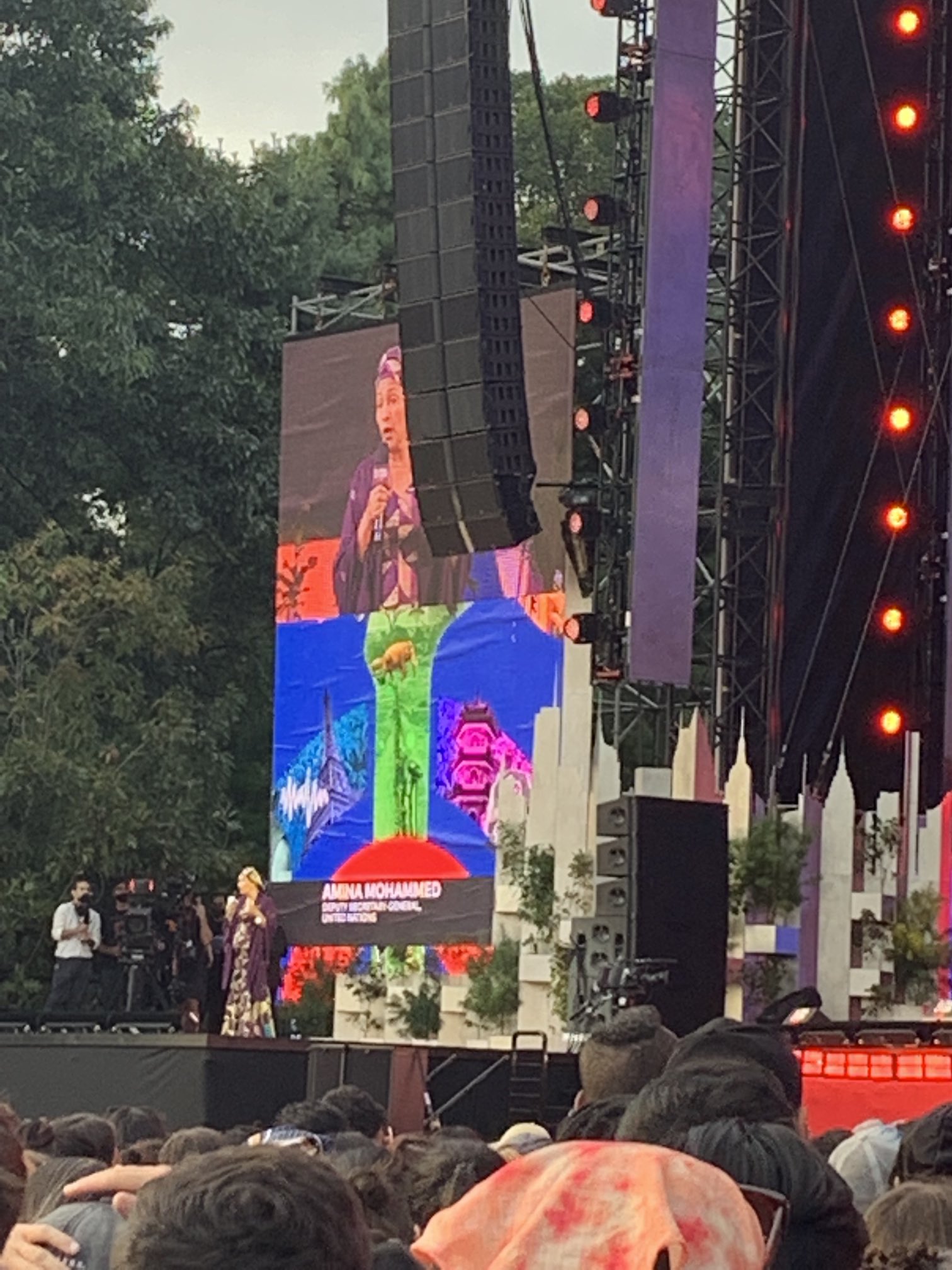 Lavrov says EU foreign policy head told him to STAY OUT of ‘our’ Africa, as he denies Moscow’s role in mercenaries invited to Mali 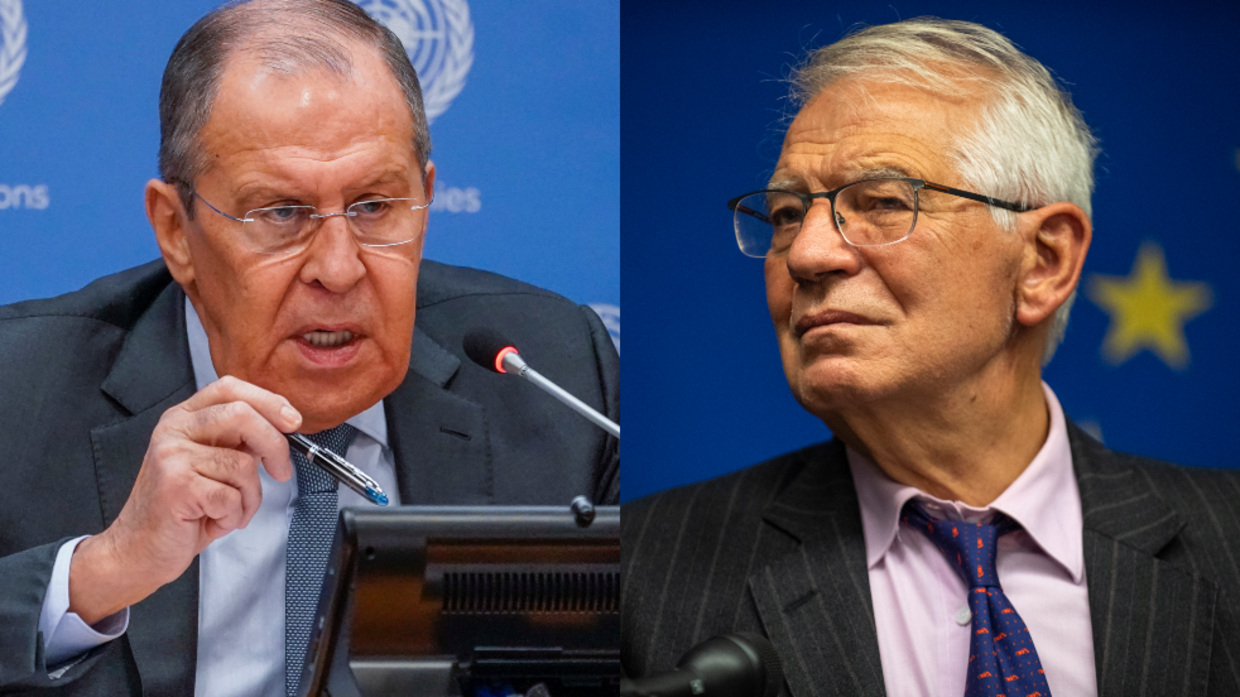 The modern EU bureaucracy may seem light years away from the rapacious colonial powers of olden Europe, but geopolitics seemingly still reigns in Brussels, with the fight this time over influence in the troubled West African nation of Mali. With Mali’s military-ruled government struggling to quell a wave of jihadism, and France on the cusp of withdrawing its forces from the region, the country is now reportedly looking to hire https://www.theafricareport.com/127421/ ... ner-group/ as many as 1,000 private mercenaries from the controversial Russian Wagner Group to bolster its own forces.

The deal led to a wave of condemnation from the West, with officials in the US and Europe viewing it as an effort by Moscow to muscle into African affairs.


We continue to be concerned about the rise… of malign influences on the continent,

Lavrov has dismissed accusations of Russian government involvement, saying on Saturday at the United Nations General Assembly in New York that the Kremlin had “nothing to do with” the deal, which was negotiated between Mali’s government and a

Mali has been seeking outside help since the assistance from its foreign backers ran out, and because its government considers its own resources to be inefficient, Lavrov said, adding that Russia has been providing assistance in the form both of “military hardware,” and diplomatically, through the UN Security Council.

Responding to a question by RT’s Caleb Maupin, Lavrov then revealed that he had had an interesting encounter with Borrell, the EU’s top representative for foreign affairs and security.


You’d better not work in Africa because Africa is our place.

The Russian FM added that Moscow and the EU should instead


work in sync in Africa, in Mali, in the Sahara/Sahel region.

Statements like ‘I’m the first here. That’s my place – go away’, this is deeply insulting. These aren’t terms you should use with anyone,

The Wagner Group gained notoriety in the media in recent years, after providing mercenary work in Syria and a handful of African countries. The group has also reportedly carried out training, security, and counterterrorism tasks in Sudan, the Central African Republic, Madagascar, Mozambique, and Libya. While its work in Africa has been described by Washington as a “malign influence,” ironically, similar American and British companies – among them Academi, https://en.wikipedia.org/wiki/Blackwater_(company) Aegis, https://www.garda.com/?origin=aegis and G4S https://www.g4s.com/ – have been contracted by the US Department of Defense and the CIA to carry out military work abroad.
Top

Once the PM assumed power Daniel will be eliminated. He was working for WEST. The history of this man speaks volume that he has hate towards Eritrea.
Top

tekeba wrote: ↑
26 Sep 2021, 07:49
Once the PM assumed power Daniel will be eliminated. He was working for WEST. The history of this man speaks volume that he has hate towards Eritrea.

I hope so because now, he's doing the same thing in his country too- ignoring the terror junta atrocities in the Amhara & Afar regions: 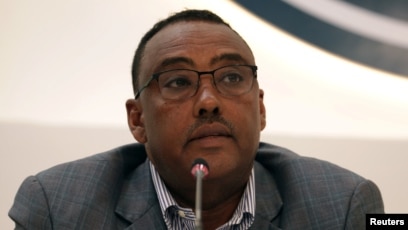 MARYLAND — Ethiopian Deputy Prime Minister, Demeke Mekonnen, says the political and security landscape in Africa is on a path of adversity following a couple of coups and other security activities.

Unless we swiftly change course, this will be yet another round to destabilize Africa and disenfranchise Africans in the determination of our destiny. We hope there will be more countries to lift the banner of multilateralism rather than the vagaries of unilateralism.


It is incumbent upon our two governments to work for peace for the sake of our people that have the strongest bond of fraternity.

He said the past year has also seen a milestone for the people of Ethiopia as the nation’s experiment with democracy ascended one level with a free, fair, peaceful, and credible election with an unprecedented level of voter turnout.

Mekonnen further noted that his country has been threatened for harnessing water from its abundant natural resources.


The Grand Ethiopian Renaissance Dam (GERD) – a hydroelectric dam project we fully financed underwent a second-year filling. Hopefully, we inspired others to develop local capability to plan, finance, and complete renewable energy projects. However, our humble attempt to light the houses of millions of Ethiopians and create hope for our youth is politicized before global bodies. This peoples' project also received unending threats. Ironically, we are accused and threatened for drinking from our water. 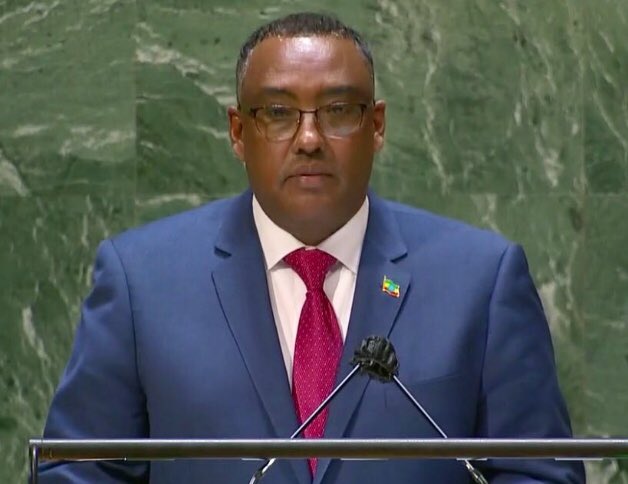 Giving a speech at the UNGA

On the matter of the Nile and the GERD, Mekonnen said the nation’s confidence


is in the might of the truth, wisdom and justice that has always defined our path for cooperation.

The generational desire to use our natural resources will not be stopped by a colonial legacy and monopolistic cause. We hope our negotiating partners are prepared for a win-win outcome under the African Union led process.

He said Ethiopia’s political reform agenda has been facing some challenges even if there were some successes in the past three years.


The changes we introduced, ushered-in democracy, human rights, human development, and regional stability. It also opened avenues for dialogue and unity among divergent political and interest groups. Tapping into Ethiopia’s rich history and enormous potential, the reform charted our inevitable and bright future - placing Ethiopia as a new horizon of hope. It overturned a complex network of corruption, illegitimate political power, and illicit financial flows -- installed at the cost of national interest and the detriment of regional peace. The reform, however, was not without challenges.

As any other democracy, our democratic process is an attempt to find a balance between stability and disruption. In Ethiopia, groups that consider equality as subjugation are making their best effort to create and prolong anarchy. At the hands of these lords of instability, we went through unimaginably inhumane attacks against citizens, instigation of violence, and destruction of property, that culminated in an attack against the Ethiopian army.

He said on the night of November four last year, in a scheme “orchestrated by a criminal group”, the Ethiopian National Defense Force was attacked from within.


The unsuspecting men and women in uniform were slain. The Government of Ethiopia, took the necessary measures to avert the grave danger imposed on us. While the government was addressing humanitarian needs, the disruptors applied their cruel design to aggravate human suffering. We were also caught by surprise, and to-be-honest, unprepared for the twisted propaganda campaign. Little did we know the power of privatized politics and foreign policy that clouds the truth from policy decisions. The criminal enterprise and its enablers created and advertised horrific imagery of faked incidents. 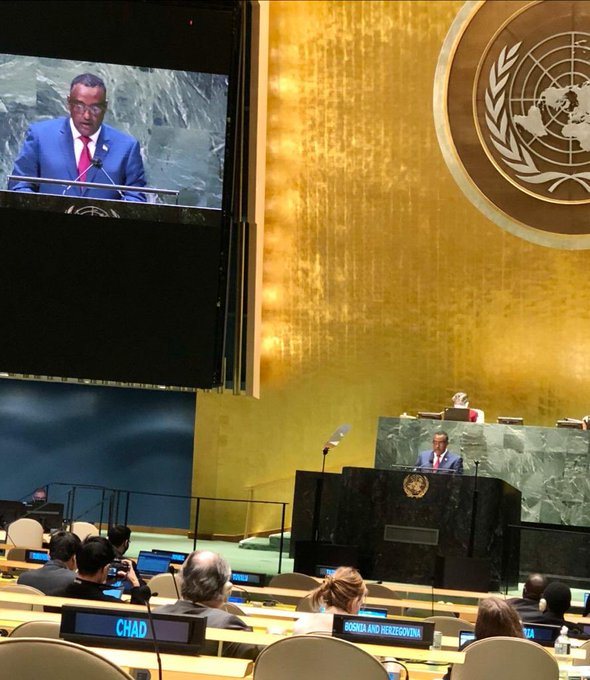 Mekonnen claimed that as if the real misery of Ethiopians was not enough, story lines were created to match not the facts but preconceived stereotypical attitudes.


The Government of Ethiopia meeting-out its obligation to fulfil humanitarian needs, the declaration of humanitarian ceasefire, the commissioning of investigations, and accountability measures have not mitigated the propaganda campaigns. At this stage, we are nearly convinced humanitarian assistance is a pretext for advancing political considerations. Accused by agenda-and-revenue driven media, convicted by misguided politics, we are now facing a unilateral coercive measure. Ethiopia opposed coercive measures, when it was applied against others, we advise against its application on Ethiopia. Prescriptions and punitive measures never helped improve situations or relations.

He said the prudent measures


we will continue to take are commensurate with the existential challenge we face. Despite the undue pressure, we shall live up to the solemn obligation to preserve the sovereignty, territorial integrity and the political independence of Ethiopia. While cooperation and concern from our friends is welcome, we underline the need to employ constructive approach, cultivate trust and ensure understanding.

Mekonnen said the entire region is facing the


destructive path paved for it by this group. Supporting Ethiopia overcome this criminal group is helping sustain regional peace. Dialogue has always been our preferred course of action. Accordingly, Ethiopia is open to candid initiatives for peace.

The Ethiopian government has been accused of killing people following a civil war in Tigray.
Top 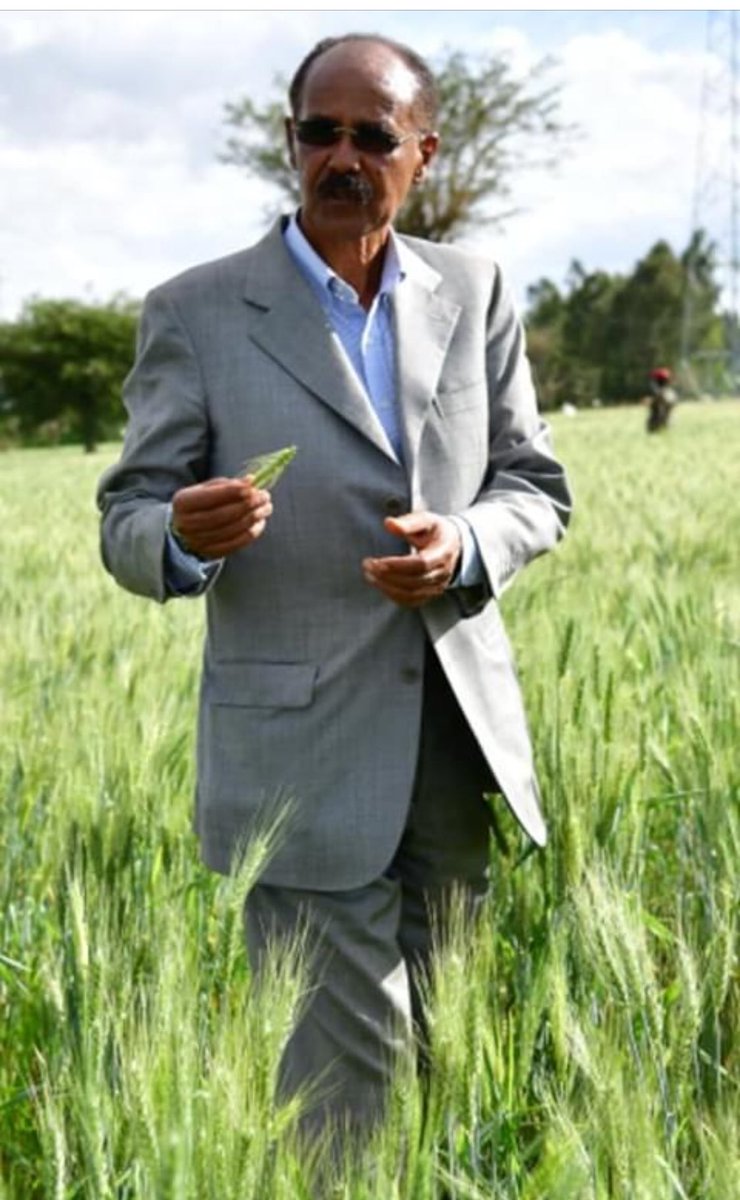 tekeba wrote: ↑
26 Sep 2021, 07:49
Once the PM assumed power Daniel will be eliminated. He was working for WEST. The history of this man speaks volumes that he has hate towards Eritrea.

I hope so because now, he's doing the same thing in his country too- ignoring the terror junta atrocities in the Amhara & Afar regions:

Yes, that is my thinking too, once the Ethiopian Government takes its election seat after the inauguration, people like Dr. Bekele should be shown the door out for he clearly has compromised the trust placed on him by the Ethiopian people. The guy is clearly a stooge of the west like his mentors, the now-defunct criminal TPLF gangs!
Top
Post Reply
9 posts • Page 1 of 1